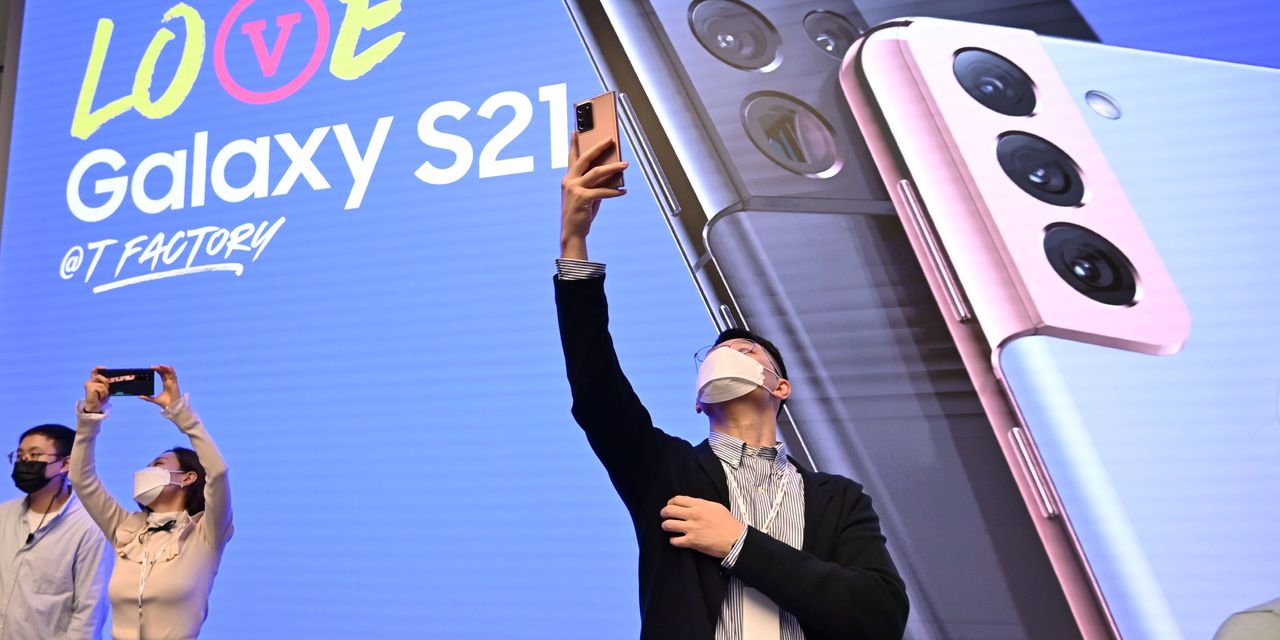 The world’s largest smartphone and memory-chip maker reported a net profit of 7.14 trillion South Korean won, or the equivalent of about $6.4 billion, up from 4.88 trillion won the prior year. Revenue rose 18% to 65.4 trillion won for the three months ended March 31.

Samsung is a proxy for the global tech world, making a wide range of electronic gadgets while serving as a components supplier for its biggest rivals.

In recent years, the Suwon, South Korea-based firm had cashed in on chips. But Samsung’s Texas semiconductor production was shut down for weeks earlier this year due to severe weather. As a result, operating profits for chips dipped 16% to 3.37 trillion won.

The facility is now fully operational, though the disruptions meant about 71,000 wafers were affected, leading to damage of around 300 billion to 400 billion won, said Shawn Han, a senior vice president for Samsung’s foundry business, during Thursday’s earnings call. Samsung is talking with local authorities and utility companies about how to avoid a similar shutdown in the future, he added.

Strength in Samsung’s mobile and consumer-electronics business helped power results that topped market expectations of about 6.5 trillion won in net income and 63.4 trillion won in revenue, according to analyst estimates gathered by S&P Global Market Intelligence.

Operating profits for Samsung’s mobile division soared by 65%, to 4.39 trillion. The results were aided by an earlier release of its Galaxy S21 flagship phone, which made its debut roughly a month ahead of its usual timetable. It was the first time in nearly five years that the firm’s mobile-unit operating profits topped those of semiconductors.

It was also helped by a weakening of some key rivals. China’s Huawei Technologies Co. has been hit by sanctions, while LG Electronics Inc. recently declared its exit from the mobile-phone industry.

Samsung’s consumer-electronics operating profits more than doubled to 1.12 trillion won. But the company warned that demand for TVs could fall in the latter half of the year, as more countries reach herd immunity and shift from home entertainment to outdoor activities.

Big tech companies have flourished, as people spend more of their time—and money—online. Chip makers have been particular beneficiaries during the pandemic. Fellow South Korean semiconductor giant, SK Hynix Inc., reported Wednesday its first-quarter net profit had risen 53% from the prior year.

Samsung forecast a significant improvement in semiconductor profits in the current quarter. Amid a global chip shortage, Samsung said demand for its semiconductors will remain strong as global economies rebound.

Prices for the two major kinds of memory chips, of which Samsung is the No. 1 producer, are expected to increase this spring. Prices for NAND flash, which fell in the opening months of the year, should rise, while prices for DRAM, which give devices multitasking power, should grow 15% to 20%, said Sanjeev Rana, a senior analyst at CLSA, a Seoul-based brokerage.

As an electronics manufacturer, Samsung said component shortages have forced discussions with retailers and other large buyers to determine which gadgets and appliances the South Korean manufacturer should be prioritizing.

“We are currently rebalancing our overall production,” said Ben Suh, an executive vice president for investor relations, on the earnings call.

Samsung’s leader, Lee Jae-yong, remains behind bars after receiving a 30-month prison sentence in a retrial of his 2017 conviction for bribing a former South Korean president. His prior time in prison of roughly a year counted toward his new sentence, meaning he could be released in July 2022.

On Wednesday, Mr. Lee and his family outlined plans to pay a more than $10 billion inheritance-tax bill, which it plans to do over multiple installments over the next five years. Samsung didn’t offer much detail on how precisely the Lee family would come up with the funds. Corporate-governance experts say the family is likely to rely on dividends from their Samsung holdings, while securing a loan backed by their company shares.