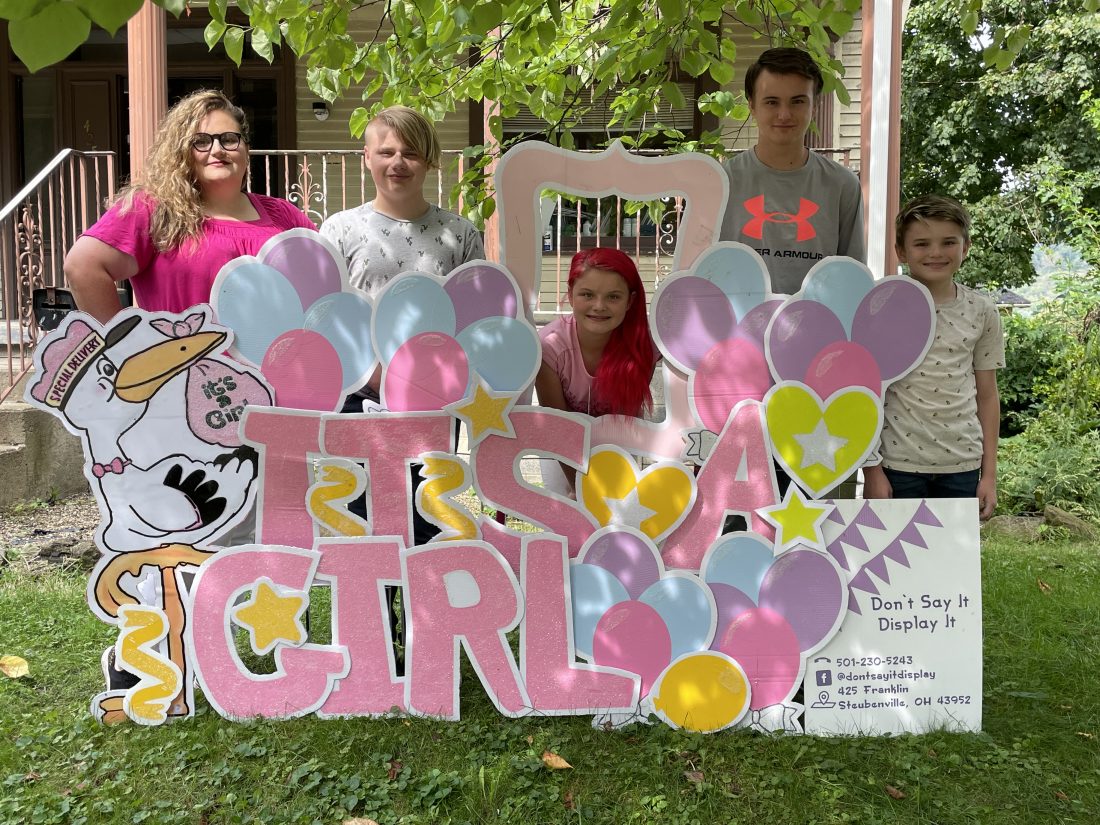 SIGN OF THE TIMES — Hilarie Jones operates Don’t Say It, Display It, a specialized sign business, with the help of her children, Patrick, Anastazia, Willium and Leighvie.
— Linda Harris

STEUBENVILLE — Packing her family up and moving them more than 800 miles was quite possibly the easiest decision Hilarie Jones has had to make in a while.

Jones, the mother of five, had a relatively short list of house-hunting must-haves:

• An affordably-priced house, a large lot and off-street parking.

• At least five bedrooms, so her kids could each have a room of their own.

• A quality school system with a good cross-country program and bonus points for schools with strong ancillary educational specialties, like aeronautics.

• A community that recognized kids don’t always fit in the same square peg.

• And an opportunity to carve out her own niche in the local business scene.

“My family was originally from Arkansas,” she said. “A really small town in Arkansas, a town of 2,500. I swear they counted some dogs and chickens with it, it was very small. It was great for kids, but I wanted to provide them with something more … more than what they had.”

Jones had looked properties in North Carolina and Minnesota before she found Steubenville, and realized it had everything she was looking for. She bought a house across from the Jefferson County Historical Museum that’s big enough for her and the kids plus their dog, a few cats and the three chickens the kids brought with them.

“I know it sounds silly, but my kids were really big in 4-H when we were in Arkansas,” she said, pointing out her eldest, 19, remained behind in Arkansas to go to college. The four younger kids are now enrolled in Steubenville City Schools. “They were OK with getting rid of their pigs and goats, but they wanted to bring just these three show chickens with them when they came.”

She’d owned a hand-stamped jewelry business in Arkansas, but knew she had to give it up because of the strain it put on her eyesight. “I knew when I moved I’d have to start a new business because I couldn’t do it any more, it requires perfect eye sight,” she said. “So I saved up enough money so that when we moved, I could pay our bills until (my) new business got to where it could sustain itself and us.”

It didn’t take her long to launch her new business, Don’t Say It, Display It,” specializing in those big, joyful, eye-catching displays that are starting to pop up in yards or anywhere people want to celebrate special events like birthdays, anniversaries, weddings, graduations, the first day of school or even remember the lives lost on 9/11.

“This business is super popular where we were from,” she said. “People like to announce everything. Then when we came here, I realized it wasn’t something that was here — my daughter’s birthday was my very first sign here. I was outside putting it up and several people driving by stopped and asked me questions about it, they really liked it. I wanted to give other people the opportunity to do the same thing.”

It’s a completely different business model than anything she’s ever done, and she might have had some qualms were it not for the help she’s received from Paramount Pursuits, the Pennsylvania consulting firm the city hired to help locals create and grow businesses.

The program was funded through Steubenville’s CARES Act allotment. To be eligible, participants must resident in Steubenville and the businesses they operate or want to start must be in city limits.

Once they’re accepted into the program, each participant is assigned a mentor who meets with them twice a month. They’ll learn how to write a business plan and network with other small business owners.

“I’d called the city’s code inspector to find out if there was a law about yard signs here in town, because some places have (laws) that they can’t be put up,” Jones said. “He was actually the one that recommended Paramount to me.”

Jones said the Paramount program has “been a blessing.”

“My mentor, I’ve learned so much from her,” she said. “My business before was jewelry, things that I could take to craft shows — people could look at them, pick them up. You can get your name out there quick because everybody can wear it. But with yard signs, you can’t really pick them up — all you can do is look at it. There were a lot of advertising platforms I didn’t know anything about, I had to learn a new way of doing things.”

She also had to learn patience.

Initially, business got off to a slow start but that’s changed, thanks to some high-profile clients like Cops ‘n Slobbers, Harding cheerleaders fundraiser and the Richmond Fire Department Gun Bash.

“Because we’re new to the area, I didn’t know how we’d be perceived,” she said. “But people like to announce things that are happening in their lives, whether it’s a baby, an anniversary or a birthday. It’s taking off.”

Jones said the signs are crafted from coroplast, a really thick, fluted plastic. Some are made on site, some she has to send out to be made, depending on what the customer wants.

She and her daughter, Anastazia, design each display. If she’s able to make them herself, her youngest son, Leighvie, applies the design to the coroplast and Willium cuts the letters or pictures out by hand.

“I love it,” she said. “All of the kids help; with every sign we do. It really is a family-owned business.”

The signs typically are about 12-feet long and about 4.5-feet high. If she has everything she needs, she said she can build one in about two days, otherwise it may take a little longer.

“Usually, we can put it all together in a day or two,” she said. “Some are pre-made, we just put pull (parts) out of the basement and assemble them outside. It still takes a little bit because of all the things people want to go with it … soccer balls or beer mugs, for instance, to make it visually appealing.”

Jones said she always gets a deep sense of satisfaction in crafting something she knows will make someone else happy, “whether it’s wearing a piece of jewelry I made or having a 12-foot-long sign I made in their front yard.”

“Just knowing that it makes them feel better, even if it’s just for a little bit, makes me happy,” she said.

And finding Paramount’s Thrive in Steubenville program was a stroke of luck, she said.

“I never heard of anything like this before or participated in anything like this, until I moved here,” she said. “It’s been a blessing in so many ways. We discuss tax options, things that are tax deductible, things I didn’t have a clue about. It also holds me accountable — there are days I wake up and I’m not in a mood to do anything, but I know I have an appointment with my mentor and she’s going to ask me a hundred questions because that’s what she always does. And I know she would ask me what I did to overcome that feeling, because that’s what she always does, and I want to be able to answer her. It’s like having a mom for your business.”

Jones is currently working out of her basement but if demand warrants, she’d love to find a storefront.

“I have things I want to do this time next year, business-plan wise, “ she admits. “This is something I plan on doing for a long time. There’s always someone that has a birthday, there’s always some that has an anniversary, a new baby or a graduation. There are always big events occurring in peoples’ lives, so I think this is something I’d like to be doing for a while.”

She’s currently taking orders within a 40-mile radius of Steubenville. You can find her on Facebook at dontsayitdisplayit and on Instagram at [email protected] or by calling (501) 230-5243.

“I’m so glad that moved here,” Jones said. “It really was the best decision for us.”

Today’s breaking news and more in your inbox