The Maryland Lottery and Gaming Control Commission announced last week it will utilize this provision as part of a push to get the new industry up and running in time for the NFL playoffs.

The commission’s online licensing portal opened Thursday to the 17 brick-and-mortar sites that were specifically granted a license in the legislation, a list dominated by casinos, race tracks, off-track betting locations and professional sports stadiums.

The commission is not ready to accept applications for the 30 additional brick-and-mortar licenses or the 60 mobile licenses that are available.

The partial opening of the “e-licensing platform” likely means that many of the 17 named businesses will get a head start on companies that have never gone through a licensing review.

That could give established companies an advantage over potential start-ups and home-grown businesses not named in the bill, critics warn.

“We’ve waited this long. We need to do our due diligence and not rely on any other licensing or decision-making that was made,” said Del. Dereck E. Davis (D-Prince George’s), head of the House Economic Matters Committee.

“We do our own homework, and whenever it’s ready, it’s ready.”

Davis said he understands the desire to launch Maryland’s betting industry as quickly as possible; many of his constituents are eager to place bets legally.

But he said Maryland risks lawsuits if it doesn’t treat all potential applicants equally. “There’s no need to get cute or sloppy now. [We must] make sure that we’re fair to everyone, so we don’t end up in court,” he said. 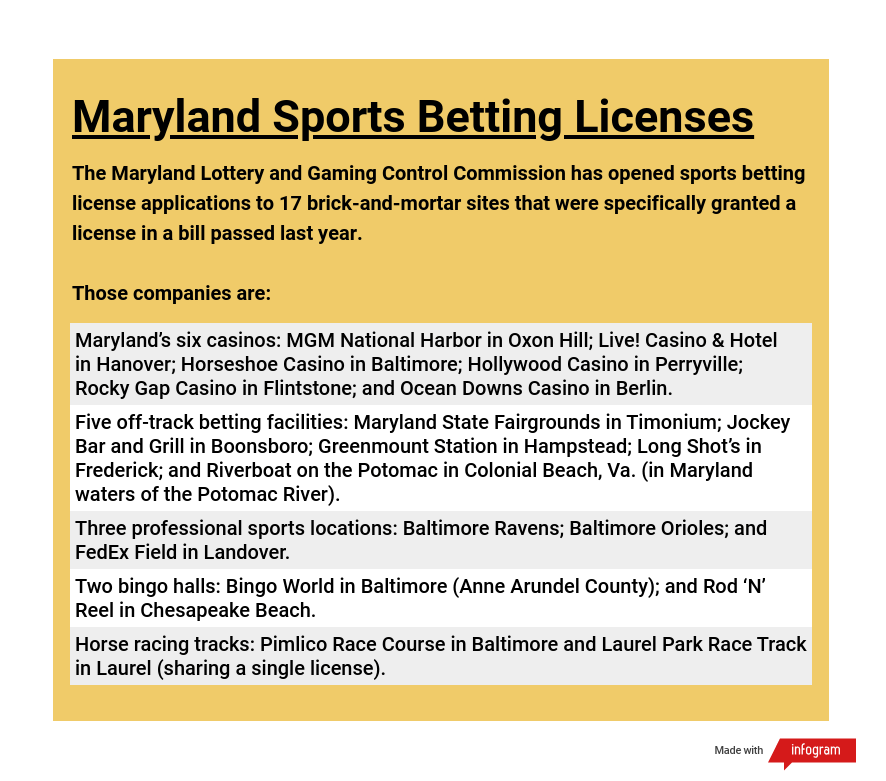 Sen. Craig Zucker (D-Montgomery), who helped shepherd the sports betting bill through the legislature, said Maryland’s law was crafted to “cut down on the bureaucracy” while still making sure that all sportsbooks are properly vetted.

As was the case when Maryland legalized casino gambling, state law requires that applicants and their suppliers, partners and employees undergo criminal and financial screenings.

Declan Hill, a journalist who has chronicled sports gambling scandals, called it “not acceptable” to rely solely on another state’s investigations process.

“It’s unfair [to] a start-up company that’s trying to do things right, trying to cross their t’s and dot their i’s, if the big boys just come in and say, ‘Hey, no problem, Nevada’s already checked us out,’” said Hill, a professor at the University of New Haven.

“We’ve got to have one starting line for everybody. Everybody has to go through due diligence in Maryland,” he said.

He called the “globalized” world of sports gaming “complicated” and “messy.”

The lottery and gambling commission’s announcement that it will consider temporary licenses to businesses that have been undergone prior vetting follows prodding from Gov. Lawrence J. Hogan Jr. (R).

In August he told Maryland Matters he has pushed state regulators to move as quickly as possible.

“I pressed them pretty hard about making sure we get it done at least by the end of football season when all the betting takes place, really — in the playoffs and the Super Bowl,” Hogan said in August.

Eric Ramsey, a sports betting analyst for PlayMaryland.com, said there is little concrete evidence that companies will get a lasting advantage from a temporary head start.

“We haven’t really seen brand loyalty,” he said. “[Bettors are] much more concerned about which operator is going to give them the best promotions.”

“Everyone wants to be first, and the first operators will certainly acquire the first batches of customers,” Ramsey added. “But those first customers will keep trying sportsbooks as new ones come into the market. They’re not just going to stick with the first brand they found.”

Maryland Lottery and Gaming Director John Martin said on Monday that the state is prepared to pull any temporary license it issues if a subsequent investigation raises red flags.

Under state law, the SWARC reviews applications to determine whether they meet Maryland’s criteria, then the Lottery and Gaming Control Commission conducts criminal and financial background investigations.