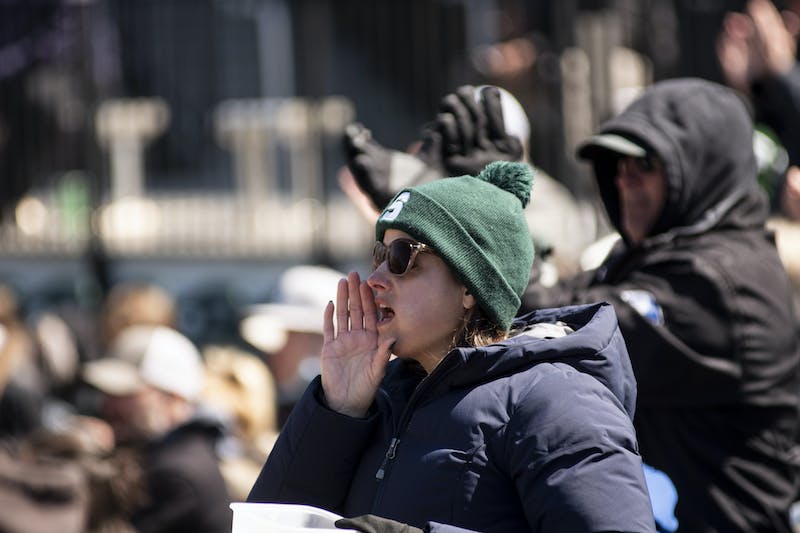 The turbulent year for Michigan State athletics is coming to a close as spring teams’ seasons are ending. The teams are in the final stretch, looking to close with success after an upside-down year of competition during a pandemic.

The uncertainty and day-to-day changes from the COVID-19 pandemic have presented one of the most unique and challenging years for collegiate athletics but Michigan State continued its spring season for all varsity sports.

Here is a look at how the Spartan teams fared during May as they approach the finish line.

Michigan State baseball has two series remaining in the season against Rutgers and Iowa. The team currently is on the outside looking in for the college world series with a record of 15-23 and no Big Ten tournament to earn an automatic qualifying bid.

The team took two out of three games against Ohio State in its latest series to snap a four-series losing streak. The Spartans won the first two games of the series over the weekend against the Buckeyes before dropping on Sunday. They snapped Ohio State’s 8-game winning streak and are looking to carry that momentum into the final two series of the season.

“Today was a really good win for our guys. I’m really proud of them to come down here and win the series on the road, it says an awful lot about the effort that our guys give,” head coach Jake Boss Jr. said in a press release. “Ohio State is a really, really good ballclub and there’s a lot of threats in that lineup from one to nine. I’m just really proud of the way our guys pitched it. I know (pitching coach) Coach Van Ameyde had them ready today and really had a good plan and those guys executed the plan. It was just a really good win for our guys today, and I’m proud of them.”

The softball team was also in Columbus to take on the Buckeyes over the weekend in the final series of their season. The team did not have the same success as the baseball team, dropping three of four games in the series to conclude their season.

Just like baseball, the Big Ten announced that there will be no 2021 Big Ten championship for softball and will leave the Spartans outside of the postseason. The team finished 14-26 on the year after the 5-0 loss to the Buckeyes on Sunday.

Michigan State’s women’s rowing team’s season also closed Sunday following the Big Ten Rowing Championship in Indianapolis. The Spartans finished in eighth and did not earn an automatic bid to the NCAA championships, marking the end of their season.

The Spartans had a pair of All-Big Ten selections in varsity eight coxswain Sarah Flowney (First Team) and stroke Maya Elbaranes (Second Team), while Kendall Carlin was the Michigan State selection for the Sportsmanship Award, a press release said.

The team is young and looking to build on the experience gained this year. This year, 32 members of the team raced for the first time collegiately and only had one senior, Cameron Novar, in the varsity and second varsity boats.

Spartans see success on the links

The Michigan State women’s golf team had a successful season that finished with a Big Ten title, making it their third conference championship in the last four years. The team finished 11-under-par, five strokes better than Michigan, Nebraska and Maryland.

The team earned an automatic bid for the NCAA Championships and competed in the regional tournament in Louisville. The run continued for the Spartans, who finished tied for fourth in the Louisville regional with 14-over-par as a team, led by All-Big Ten golfers Valery Plata and Yurika Tanida, who shot one-over-par and one-under-par, respectively.

The championships will take place from May 21-26 at Grayhawk Golf Club in Scottsdale, Arizona. This is MSU’s first appearance since 2017 and the 13th in program history.

“It’s an incredible feeling knowing that you’re one of the best 24 teams in the country,” head coach Stacy Slobodnik-Stoll said in a press release. “There was no question in our minds as coaches, but sometimes the challenge is getting your players to believe it as well. We just beat the No. 1 team in the country and getting to the NCAA Championships is the pinnacle and what you play for. Having the opportunity to prove who you are and what you can do is awesome.”

The men’s golf team finished in fourth place at the Big Ten Championships that took place the first weekend of May. The team finished with a composite score of 40-over-par 904 to finish in the top four of the Big Ten for consecutive years.

Senior James Piot led the team, finishing five-over-par to secure sixth place in the Big Ten. Piot qualified for the NCAA Regional tournament in Kingston Springs, Tennessee. Piot is the first Spartan’s men golfer to qualify as an individual since 2013 and has the chance to cap off his career with a strong performance in the NCAA tournament.

Piot, who was also voted to the All-Big Ten First Team, leads Michigan State with a 71.3 scoring average. The Canton native has one individual title this year and has placed in the top six in five of the Spartans’ last six tournaments.

MSU Track and Field season comes to an end

The men’s and women’s track and field teams participated in the Big Ten outdoor track championships this weekend to cap off their 2021 season.

Two members of the women’s team, Sophia Franklin and Jenna Magness, and a runner for the men’s team, Morgan Beadlescomb, captured Big Ten titles for their respective events on Sunday to end the season on a high note for the Spartans.

Franklin won the Big Ten title for Pole Vault with a height of 4.35M, the ninth-best performance nationally this year. Magness won the women’s 5000m with a time of 15:38.82, which smashed the previous Big Ten record by over 10 seconds. Magness also won the indoor Big Ten title for the 5000m this year.

Beadlescomb was the only member of the men’s team to win an event for the men at the Big Ten Championships, who won the 5000m men’s race. Beadlescomb finished with a time of 13:49.05 to be the first Spartan to win the 5000m since 1997.

Share and discuss “Spring sports recap: Golf finds success at the end of the season, baseball struggles” on social media.