Pairings and live scoring via Golfstat

Stanford, Calif. – Bartley Forrester shot 1-over-par 71, and Luka Karaulic a 2-over 72 for Georgia Tech’s best individual rounds Friday, and the Yellow Jackets posted an 11-over-par total of 291 for the day and fell to 18th place after 36 holes of The Goodwin at the Stanford Golf Course.

Only two teams in the 28-team field, including leader Arizona State, was able to break par as a team in Friday’s second round, and only the Sun Devils and host Stanford are in red figures for 36 holes. Tech begins the final round at 8:10 a.m. local time Saturday from the first tee, paired with Southern California, Oregon and Brigham Young.

TECH LINEUP – The Yellow Jackets largely avoided the high scores that plagued them Thursday, but had only 11 birdies collectively in their round. Forrester, a sophomore from Gainesville, Ga., had just two birdies and three bogeys in his round, while Karaulic, a sophomore from Dacula, Ga., recorded three birdies and five bogeys.

Tech also counted a 3-over-par 73 from Noah Norton (Chico, Calif.) and a 75 from Christo Lamprecht (George, South Africa), each matching their opening rounds. Connor Howe (Ogden, Utah), whose 68 led the Jackets Thursday, did not count for the Jackets Friday after posting a 76, but remains the highest Tech player on the leaderboard, tied for 41st place at 4-over-par 144. 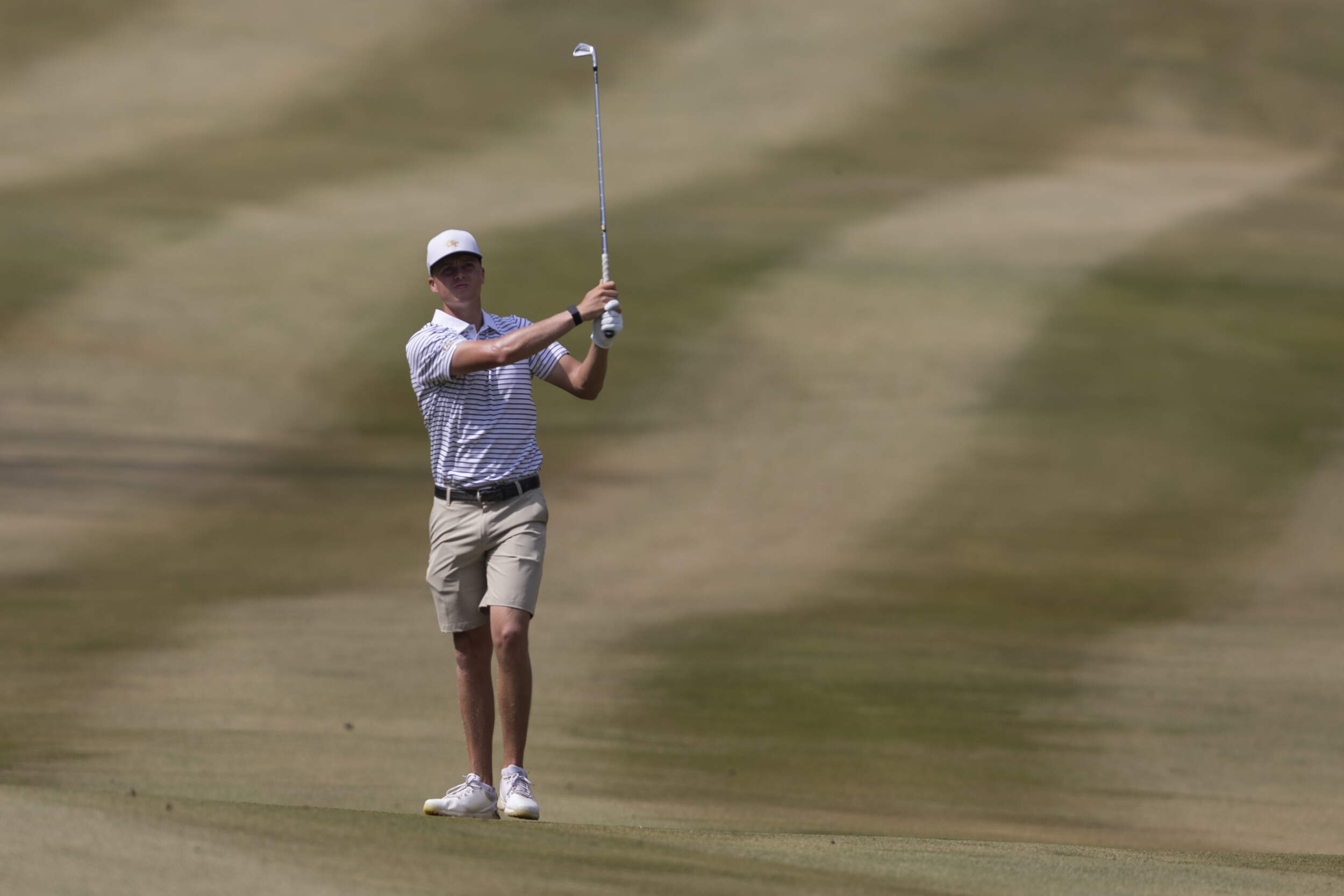 TEAM LEADERBOARD – Arizona State, the 8th-ranked team in the nation, benefitted from three subpar rounds, a 65 from Chun An Yu and 69s from Ryggs Johnston and Mason Anderson, to posted a 7-under-par round of 273 and take a five-stroke lead over host Stanford. The Sun Devils finished 36 holes at 9-under-par 551, while the Cardinal have a two-round total of 556 (-4).

Santa Clara’s Matt McCarty is alone in fourth place at 134 (-6), followed by the Sun Devils’ Yu at 136 (-4). Minnesota’s Angus Flanagan, Florida Atlantic’s Max Sturdza, Southern Cal’s Kaito Onishi, Pepperdine’s Joe Highsmith and San Diego’s Jamie Cheatham are tied for sixth place at 137 (-3). Eighteen of the 146 players in the field are under par through 36 holes. 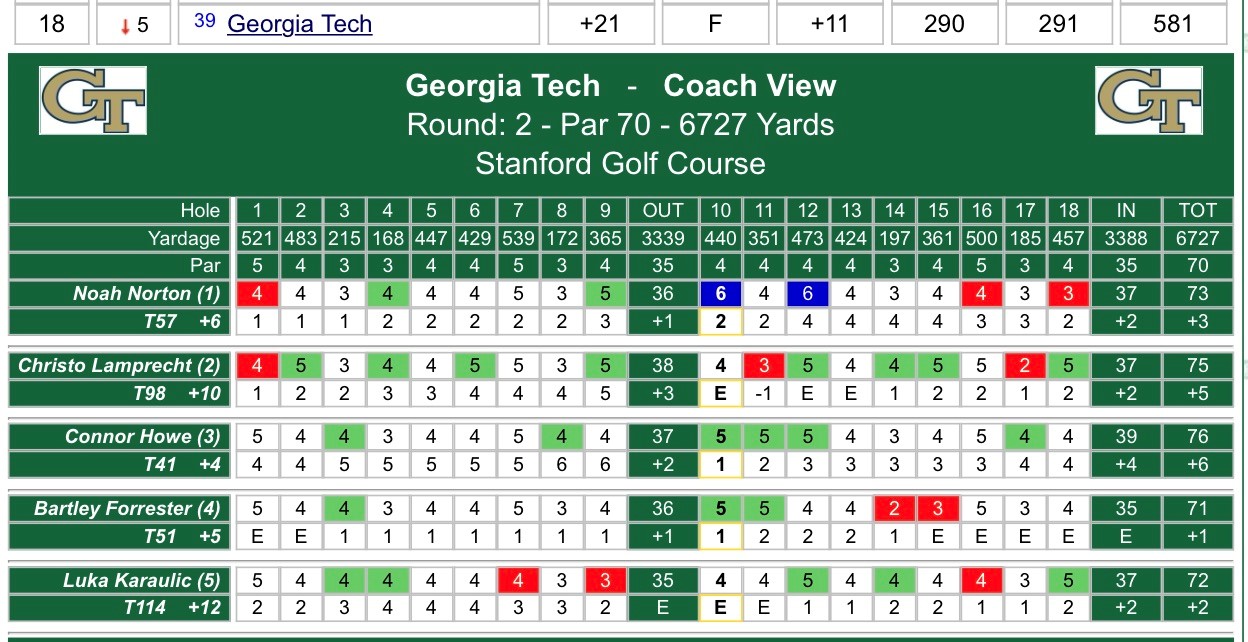 “We had solid rounds from Bartley and Luka, our fourth and fifth guys, today, but the guys who led us Thursday didn’t play as well today. Hopefully we can get everyone on the same wavelength tomorrow and run down some of the people that are ahead of us.”

TOURNAMENT INFORMATION – This is Georgia Tech’s first appearance at The Goodwin, named for legendary Cardinal head coach and the second time Yellow Jackets have played an event at the Stanford Golf Course (6,732 yards, par 70), having competed in an NCAA regional tournament there in 2017. The format is 54 holes, 18 each day beginning at 7 a.m. Pacific time from both the first and 10th tees, with the low four individual scores of five each day counting toward the team total.

The field, larger than usual at 28 teams, includes only two teams from East of the Mississippi River (Tech and Florida Atlantic) and seven teams from outside the Pacific time zone. Host Stanford has won the tournament 16 times since the inaugural event in 1968. Arizona State (No. 5), Pepperdine (No. 15) and SMU (No. 19) are the highest ranked teams in the field, which also includes California, Colorado, Minnesota, Northwestern, Oregon, Southern California, UCLA, Washington and Washington State.

The Alexander-Tharpe Fund is the fundraising arm of Georgia Tech athletics, providing scholarship, operations and facilities support for Georgia Tech’s 400-plus student-athletes. Be a part of developing Georgia Tech’s Everyday Champions and helping the Yellow Jackets compete for championships at the highest levels of college athletics by supporting the A-T Fund’s Annual Athletic Scholarship Fund, which directly provides scholarships for Georgia Tech student-athletes, and the Support The Swarm Fund, created to give fans an opportunity to help Georgia Tech athletics maintain its recent momentum through the financial challenges of the Covid-19 pandemic! To learn more about supporting the Yellow Jackets, visit atfund.org.

Georgia Tech’s golf team is in its 26th year under head coach Bruce Heppler, winning 64 tournaments in his tenure. The Yellow Jackets have won 18 Atlantic Coast Conference Championships, made 29 appearances in the NCAA Championship and been the national runner-up four times. Connect with Georgia Tech Golf on social media by liking their Facebook page, or following on Twitter (@GTGolf) and Instagram. For more information on Tech golf, visit Ramblinwreck.com.