Tech softball wins one, loses one against Jayhawks | Sports | dailytoreador.com – The Daily Toreador 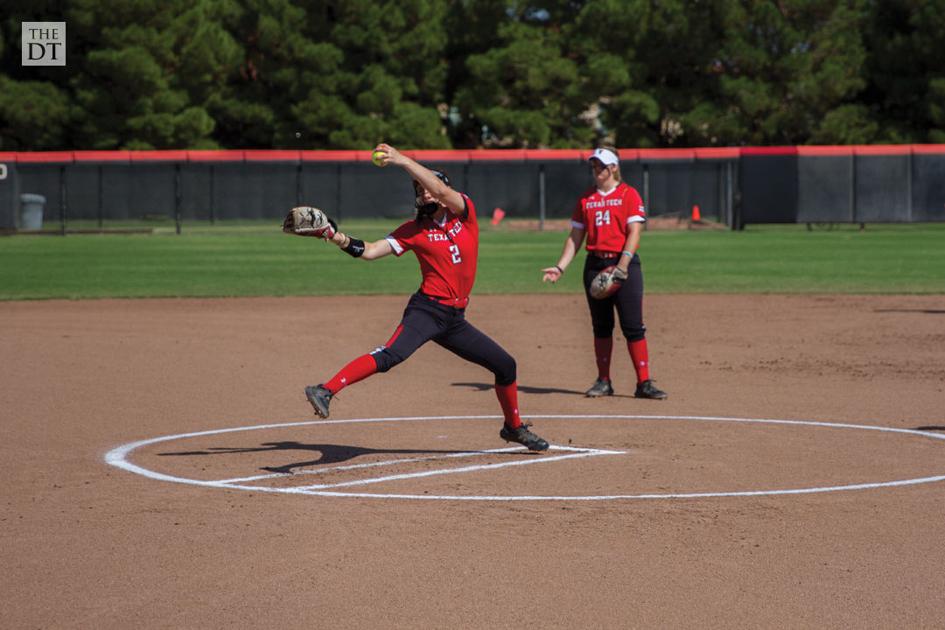 Texas Tech softball went 1-1 in today’s double header against the Kansas Jayhawks, improving their record to 17-19 overall and ending their nine game losing streak that all came against conference opponents.

Tech gained their first conference win over Kansas by a score of 8-4 in a game that saw Tech come back from a four-run deficit and take it to extra innings. In the second game, however, they were unable to come back from a first inning 3-0 deficit.

The first game of the double header did not feature a change in the scoreboard until the bottom of the second, when Kansas jumped to a 3-0 lead after Missy Zoch gave up a bases-loaded double after giving up two walks and a bunt in her previous three at bats.

Kansas would have runners on second and third again before the inning was over, but her fifth K of the day retired the side.

After keeping Tech scoreless on offense yet again, Kansas carried their momentum into the bottom of the third, when an RBI single scored the fourth run of the game. Zoch then retired the next three batters to end the inning.

After three innings of play, the Red Raiders faced a 4-0 deficit with only one run hit so far, that being a single by junior outfielder Yvonne Whaley.

Kansas’ starting pitcher and redshirt senior Hailey Reed recorded her second 1-2-3 inning of the game in the fourth, and Zoch followed with three straight after giving up a leadoff walk.

Tech finally rebounded and got their first run on the board in the form of a solo home run by freshman catcher Kennedy Leach in the top of the fifth, but would be the only run scored as Tech failed to record another hit before the side was retired.

Zoch responded to the offense’s show of life by throwing her first 1-2-3 inning of the game to end the fifth inning.

In the sixth inning, Tech’s offense thrived off the momentum from the inning before and Zoch’s time on the mound. Redshirt senior Heaven Burton started with a one-out single, and then stole second to move into scoring position.

Burton’s steal was her 16th of the season, easily leading her teammates, and was followed by a two-run home run off the bat of senior outfielder Karli Hamilton.

Hamilton is also a team leader on the Red Raiders, as that home run was her sixth of the season, three more than freshman infielder Arianna Villa who is second on the team.

Kansas also found success with their bats, though, loading the bases for the second time with no outs in the bottom of the sixth. Zoch stepped up in the high pressure situation, forcing a lineout and two straight strikeouts to end the inning.

In the top of the seventh, the Red Raiders tied up the game with an RBI single by freshman utility player Jacee Hamlin. Two following singles would load the bases, but Tech’s offense would fail to take the lead.

Tech tied the game at 4-4, and they would keep the score tied through the bottom of the inning after Zoch was able to end the seventh after two straight strikeouts.

In the top of the eighth, Tech’s bats kept up their strong hitting, with five straight singles bringing home three runners. Hamilton followed with a sacrifice fly-out that scored Hamlin, but Villa struck out in the next at bat, ending the inning.

Zoch responded with three strikeouts to end the eighth inning and the game with a score of, giving Texas Tech their first win over a conference opponent this season, ending their nine game losing streak.

Zoch threw for nearly two hundred pitches (196) in the first game of Tech’s double header, throwing a career high in strikeouts with 16 to improve her record this season to 8-9. Zoch also threw nine walks and allowed four runs on nine hits.

In the second game, Tech fell to a 3-0 deficit in only the first inning. Kansas started with a single and a walk, but Tech’s starting pitcher senior Erin Edmoundson struck out the next two batters.

Edmoundson then hit the next to batters to fill the bases and force one home, then giving up an RBI single to Kansas’ freshman outfielder that brought home the third run. Edmoundson got out of the inning with a strikeout however, her third of the inning.

Down 3-0, it was Tech’s turn to load the bases in the top of the second, yet they did so without a hit and stranded all three on base when the inning closed with a Whaley groundout.

Edmoundson had a much better outing in the bottom of the second than the first, ending the inning after only four batters, giving up a single that never advanced.

In the top of the third, the Red Raiders loaded the bases yet again, but a foul out by junior outfielder Zoe Jones followed by a Leach strikeout would end the inning scoreless.

Edmoundson threw her second three-strikeout inning in the bottom of the third, although she gave up a single, a walk, and hit a batter to load the bases in the process. She failed to allow a run pass home plate though, maintaining Kansas’ 3-0 lead entering the fourth.

In the top of the fourth, Tech failed to score their first run after a pair of ground outs and a fly out, but Edmoundson did not allow Kansas to improve their lead by throwing a 1-2-3 inning (1 K) to retire the side.

The fifth inning resembled the fourth, as the Red Raiders batted into a 1-2-3 inning, and Edmoundson threw three straight strikeouts to move her total to 11 and complete her second straight three batter inning.

The sixth inning maintained the defensive theme from the two innings prior, with two ground outs and a strikeout by the Red Raiders ending the top of the inning. Edmoundson responded with two strikeouts (5 straight) and threw a runner out at first to close the inning.

With one more inning available to tie the game, the Red Raiders got off to a bad start with two straight fly outs. Burton battled to a full count after the two outs, and hit a single to third to keep the game alive.

Hamilton came up to bat, the team’s leader in walks, doubles, triples, and home runs, yet she wasn’t able to save the game as she grounded out to second only two pitches deep into the at bat.

Edmoundson’s threw a complete game, with a final stat line consisting of 13 strikeouts (tying a season high) and only two walks, while allowing three runs and three hits.

With Kansas coming out on top in the second game, they split the double header Saturday, April 17, and tied the series at one win a piece.

Tech gained their first win against a Big 12 opponent with the first game of their weekend series and dropping the second, they will look to win their first inter-conference series at 2 p.m. Sunday, April 18.