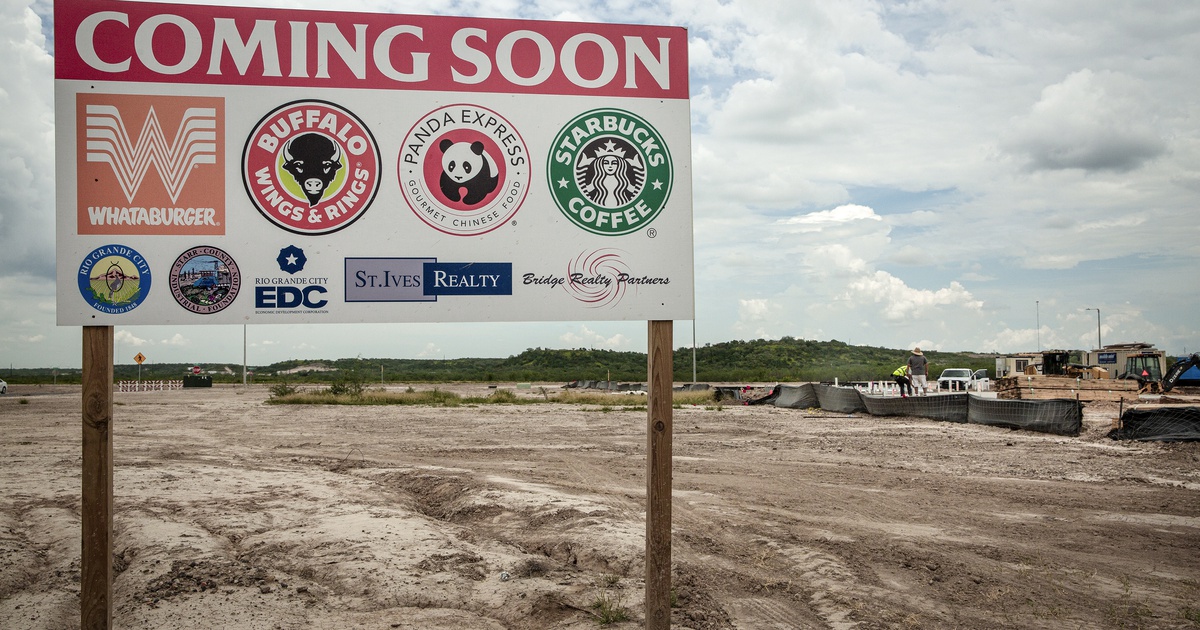 Sign up for The Brief, our daily newsletter that keeps readers up to speed on the most essential Texas news.

Shovels stuck out of the dirt this week near Texas’ border with Mexico for a groundbreaking ceremony in Starr County’s Rio Grande City.

A row of men and women with white hard hats stood behind the gold-painted shovels, which were decorated with patriotic red, white and blue ribbons. The group posed for a photo Wednesday to commemorate the historic moment — and said they were ready to turn dirt for construction.

It was not the first sign of Gov. Greg Abbott’s plan to build a wall near the boundary with Mexico. And it didn’t reflect the scenes that Abbott and Lt. Gov. Dan Patrick described Wednesday at an Austin news conference where they talked about unsafe border communities being “invaded,” echoing language used by the El Paso shooter in the 2019 massacre.

The shovels in rural South Texas actually belonged to the Rio Grande City Economic Development Corporation, which helped announce the construction of Rio Grande City Village, a new plaza that will feature Buffalo Wings & Rings, Panda Express, Starbucks and a Hilton hotel — all opening for the first time ever in Starr County.

But Wednesday’s dueling messages about the border region from local officials in Rio Grande City versus state leaders in Austin were at odds. While powerful state politicians are saying that border communities are unsafe and need to be protected by a wall, some local officials say that such attention is misplaced and that the broader needs of their communities are being ignored.

Many local officials and people in the business community along the border have become familiar with navigating rhetoric from Abbott, Patrick, Sen. Ted Cruz and other state leaders who have shaped parts of their campaigns and governance on the idea that border communities are unsafe.

Locals would often rather talk about boosting the local economy, especially as it recovers from the pandemic-induced economic recession. South Texas was hit particularly hard by both the pandemic and the recession.

In the last year, Starr County had the highest peak of joblessness out of all Texas counties at 21.7% unemployment. Joblessness was also pervasive in most other border counties along the Rio Grande, especially in rural border counties where many people work in oil and gas, an industry that has seen a decline in jobs for years but especially suffered during the pandemic.

Now, local border economies are looking to recover with the addition of new business opportunities like those coming to Rio Grande City Village.

“This is a great way to start the post-pandemic recovery period — everyone is really excited to come out of this with some great news of jobs coming and investments coming to our area,” said Dalinda Guillen, executive director of the Rio Grande City Economic Development Corporation. “The timing of it is just excellent.”

And border economies are trying to continue leveraging opportunities the border presents for international trade, long a source of jobs and economic growth for the border region.

“I agree with the governor that there is an invasion taking place,” said Teclo Garcia, director of economic development for the city of Laredo. “But it’s an invasion of trade and commerce from Mexico. And that commerce and trade is creating jobs and growing the economy.”

The timing of rhetoric aimed at the border from Abbott, Patrick and other state leaders, however, is unhelpful to the business community on the border, said Monica Stewart, who owns property in downtown McAllen. She said leaders in Washington should focus on fixing the legal immigration system to better enhance how people can efficiently get across the border, because much of McAllen’s sales tax revenues come from Mexican shoppers.

But with coronavirus and other restrictions still in place at international bridges, Stewart said “people are closing their doors because they can’t afford the rent and afford to do business.”

“Let’s face it,” Stewart said, “our business depends on Mexicans coming to shop.”

In addition to losing some sales tax revenues, local officials said the rhetoric about crime-filled border communities gets in the way of recruiting people to work or study along the border.

Violent crime in the county’s largest city is minimal — McAllen recorded one homicide in 2019 and three in 2020.

“According to my people here in law enforcement, the criminal acts here are petty and low in volume,” Cortez said. “We have a very high percentage of people in poverty. We need jobs for them. In order for that to happen we need people to come here and invest with us. Why would people want to invest with us if they only hear bad things?”

Alex Meade knows what it’s like to hear from hesitant investors. A banker who worked in economic development for multiple South Texas cities, Meade has had to combat fear from prospective investors and their families.

He recalled hosting one out-of-state executive and his wife for a visit years ago. At one point during the visit, Meade said he came across an acquaintance who made a joke about drug cartels. The executive’s wife heard the comment, Meade said.

“The fact that it came to mind was alarming to her,” Meade said. “So I never saw that company again. At the same time, it didn’t keep us from recruiting companies.”

Meade also told stories of hesitant investors who spent time in the region, saw the business opportunity and put down their money. Many in the border business community said it’s important to be upfront with people about the realities of doing business in the region.

“‘We’re growing, we’re close to the border, these are the challenges we have,’” Meade said he tells investors. “‘We do see a lot of Mexican license plates, people cross over to shop.’ You can’t have investors come here and be surprised and potentially uncomfortable. You have to tell them what we’re all about and how it’s incredibly safe here despite what they might hear.”

Josh Mejia, executive director of the Brownsville Community Improvement Corporation, has not had trouble attracting big-time investments. Elon Musk, among the richest people in the world, has a large location for his space company located in South Texas and has donated significant money to local initiatives, Mejia said.

But this week, another out-of-town investor raised a concern. The investor, Mejia said, had spent plenty of time in the region and had grown comfortable.

“I’m hearing from a lot of peers that the border is unsafe,’” Mejia said the investor told him. “‘But what I’m seeing is the opposite.’”