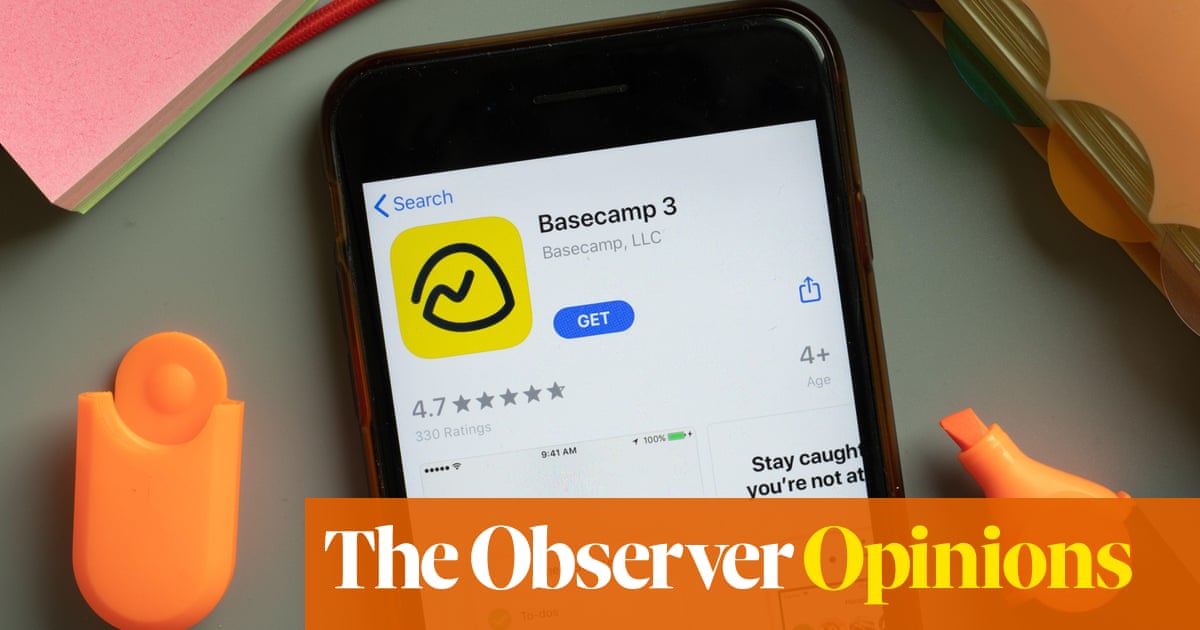 Basecamp is a plucky little (57-person) tech company that makes useful and imaginative project-management software and innovative email software. Or, rather, it was until a fortnight ago, when it suddenly became embroiled in a traumatic internal row between its employees and its two cofounders, Jason Fried and David Heinemeier Hansson, a row that has transformed Basecamp into a much smaller company bearing the scars of collateral damage from a firefight in the culture wars.

Although Basecamp is a minnow in the world of tech giants, what happened there reflects what is already commonplace in its bigger counterparts. This is because, at base, the company’s internal dissension highlighted that the conflict was actually between the sociopathic imperatives of a corporation and the feelings of skilled employees concerned about the racism and sexism that is endemic in both US society and in an industry that for decades pretended that it was above such sordid concerns.

The first indication to the outside world that something was awry came on Monday 26 April when Fried, the company’s CEO, published a blogpost entitled “Changes at Basecamp”. “In the product world,” it began, “not all changes are enjoyed by all customers. Some changes are immediately appreciated. Some changes take time to steep, settle in and get acquainted with. And to some, some changes never feel quite right – they may even be deal-breakers. The same is true when changing your company, except that the customers are the employees.”

He then followed up with six bullet points stating how things were going to be at Basecamp from then on. The first was: “No more societal and political discussions on our company Basecamp account.” The final point read: “No forgetting what we do here. We make project-management, team-communication and email software. We are not a social impact company.”

That last point, which suggested that this was more than simply a marketing “pivot” (to use tech industry jargon), prompted Casey Newton, a fine tech journalist, to start digging. What he found was that Basecamp sales staff had for a decade been building a list of customer names that they regarded as funny. Many of the names were of American or European origin. But others were Asian or African and eventually the list, titled “Best Names Ever”, began to make people uncomfortable. “What once had felt like an innocent way to blow off steam,” wrote Newton, “amid the ongoing cultural reckoning over speech and corporate responsibility, increasingly looked inappropriate and often racist.” And it was internal discussions about the list – and how the company ought to hold itself accountable for creating it – that led directly to the CEO’s first bullet point.

Fried’s blogpost – and another by Hansson on “Basecamp’s new etiquette regarding societal politics at work” – caused such a storm on social media that on the following Friday, Fried convened one of those quaintly named “all-hands meetings” to discuss the fallout. What followed, reported Newton, was “a wrenching discussion that left several employees I spoke with in tears. Thirty minutes after the meeting ended, Fried announced that Basecamp’s longtime head of strategy, Ryan Singer, had been suspended and placed under investigation after he questioned the existence of white supremacy at the company.” Over the weekend, Singer, who worked for the company for nearly 18 years and wrote a book about product management for Basecamp titled Shape Up: Stop Running in Circles and Ship Work That Matters, resigned. And at least a third of the company’s employees announced that they were accepting buyout offers and leaving.

At one level, although what has happened was clearly traumatic for the individuals involved, this small-town saga might seem like a storm in a teacup when viewed against the scale of the tech industry and its giant corporations. But it highlights the extent to which all corporations are intrinsically sociopathic, in the sense that they are ultimately indifferent to the feelings of the humans they employ. When organisational imperatives conflict with employee needs, the outcome is always predetermined: the organisation wins.

The interesting thing about the tech industry is the way some of its most famous companies tried to pretend that they were different from old-style, ruthless capitalist machines. Remember all the employee perks – free gourmet food, creches, on-site massages, free air-conditioned commuting buses, Friday ask-me-anything meetings with corporate leaders, etc, designed to create the illusion that the organisation really cared about its employees, which in fact were often a strategy for ensuring they were willing to work all night and at weekends to meet corporate deadlines?

Employees’ experience of the tech giants, particularly Google, Facebook and Amazon, in recent years has exposed this faux concern for the sham that it is. So perhaps the real significance of Fried’s crisp bullet-pointed announcement was its confirmation that, in the end, even cosy little outfits such as Basecamp are corporations too.

Upskill this
There is a thoughtful piece by Annie Lowrey in the Atlantic about why “low-skilled” workers aren’t a problem to be fixed.

Brain-bending stuff
Malcolm Gladwell, the foremost trader in ideas, gives an interesting (paywalled) interview in the Financial Times on the importance of changing your mind.

Wake up, sheeple
Again in the Atlantic, Tim Harford offers a counterintuitive perspective on conspiracy theorists and why what they don’t believe is as important as what they do.