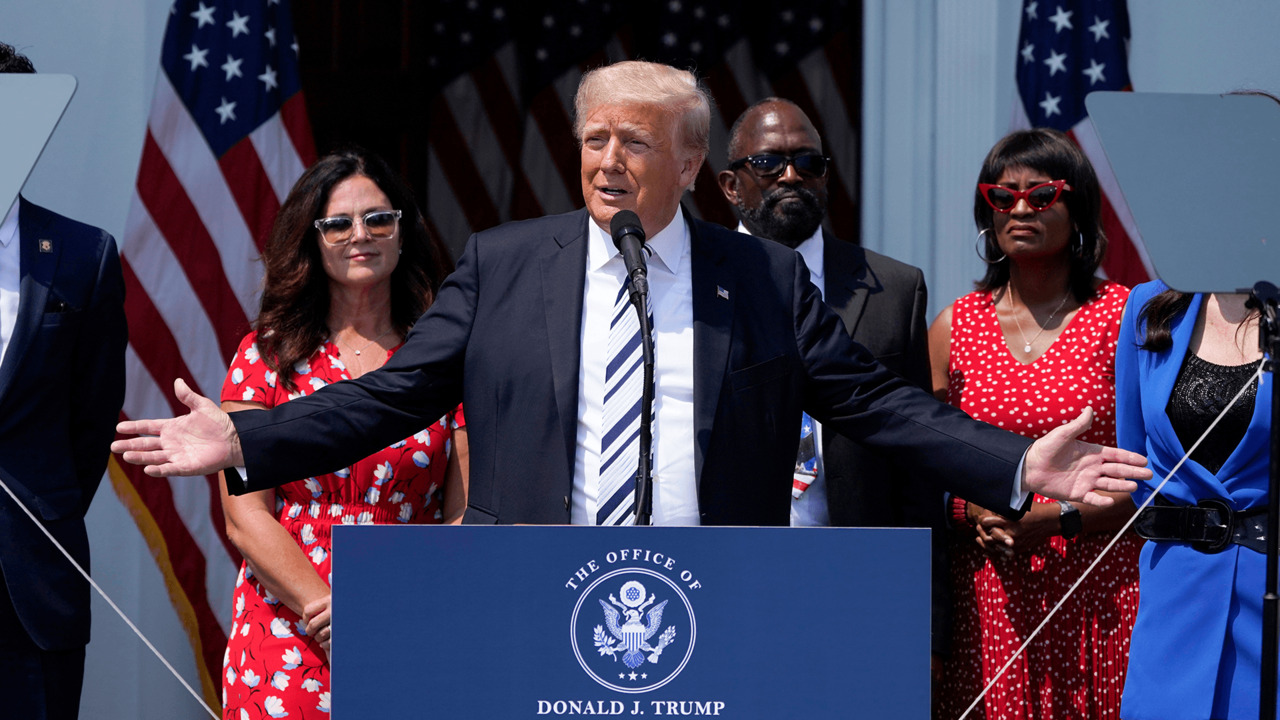 Speaking at a televised event announcing the class-action lawsuits, streamed on a website that included a prominent “Donate” button, Trump said he hoped the move would usher in a wave of complaints against the tech companies.

“This is the first of numerous other lawsuits I assume that would follow, but this is the lead, and I think it’s going to be a very, very important game changer for our country,” he said. “It will be a pivotal battle in the defense of the First Amendment.”

“This lawsuit is a stunt, and it’s unlikely to find traction in the courts,” said Jameel Jaffer, executive director of the Knight First Amendment Institute at Columbia University — adding that Trump’s legal claims are “not at all persuasive” and run afoul of his own record as president.

“The complaint argues that [Democratic] legislators coerced Facebook into censoring speech, but no government actor engaged in this kind of coercion more brazenly than Trump himself,” Jaffer said.

Republicans have notched few if any legislative or regulatory wins in their push to punish tech companies for allegedly stifling their viewpoints. Trump’s own efforts while in office to get federal agencies and Congress to scale back the companies’ legal protections fizzled.

And with Democrats now in control of Congress and the White House, Republicans have been left with few if any options for inflicting real damage at the federal level against tech companies over alleged bias against conservatives. The Democrats, who dismiss the bias accusations as fantasy, are focusing instead on efforts to make it easier to break up the tech giants — a cause that has attracted some GOP support. (The companies themselves deny the censorship accusations.)

But the barrage of complaints filed by Trump and other plaintiffs against Facebook, Twitter, Google-owned YouTube and their top executives on Wednesday serves to draw the tech companies into yet another uncomfortable and highly public bout with the former president, whom they suspended from their platforms after he praised the rioters who rampaged through the Capitol on Jan. 6.

The litigation reflects a push to get courts to wade into the debates around free political speech online that have split Democrats and Republicans across Washington and brought most legislative efforts at platform regulation to a standstill.

“Putting this to the courts is the right way to do it,” said Katie Harbath, a former Facebook public policy director who served as a staffer on Trump ally Rudy Giuliani’s 2008 campaign. “We need to start having precedent around some of these types of issues to actually go through the proper due process of law.”

For one, Trump’s lawsuits call on the courts to strike down a legal shield for tech companies known as Section 230 that he unsuccessfully sought to scale back while in office, a law that his Republican allies on Capitol Hill have also targeted to no real effect. The 1996 provision shields websites from lawsuits over the user-posted content they host, and it gives them free rein to take “good faith” steps to curb material they deem dangerous, noxious or in any way objectionable.

Trump’s litigation faces an uphill battle in the courts, where a long line of decisions has made it clear that First Amendment free speech protections apply only to governmental action — they don’t prevent private companies, including social media networks, from policing the content they host. The suits seek to overcome that obstacle by arguing that the social media companies’ moves amounted to “state action” because they acted “in concert with federal officials, including officials at the CDC and the (Biden) White House.”

“Taking it to court really provides them the opportunity for those facts to be argued and presented and then ruled on by the courts,” said Clare Morell, a former adviser to Trump Attorney General William Barr and a policy analyst at the Ethics and Public Policy Center.

Some legal scholars said Wednesday that those arguments are meritless.

“Trump and his lawyers need to read the first line of the First Amendment,” Barbara McQuade, a professor from practice at the University of Michigan law school, tweeted. “His lawsuit complaining of censorship against private social media companies and their leaders is going nowhere.”

Trump’s lawsuits are the latest in a long series of complaints filed in the courts by prominent Republican officials and conservative groups alleging they have been censored by the tech giants, cases that have been largely dismissed out of hand by the courts.

Trump said he plans to sue Jack Dorsey and Mark Zuckerberg, the chief executive officers of Twitter and Facebook, respectively, as well Sundar Pichai, who heads Alphabet, the parent company of Google and YouTube. The cases were filed in federal court in the Southern District of Florida.

The lawsuit is being supported by the America First Policy Institute, a newly established nonprofit stocked with ideological allies and former Trump administration officials to advance the former president’s agenda after he left office. The litigious former president has a decades-long history of both suing, and threatening to sue, dating back to his career as a New York City real estate developer.

Trump has bitterly complained about losing his social media megaphone in the wake of the Jan. 6 insurrection, arguing that his expulsion from those platforms is evidence of bias against conservative speech by the tech giants. In June, Facebook announced that the earliest Trump would be allowed to regain access to his accounts would be 2023.

Despite the popularity of right-wing figures on major social media platforms, Republicans have become increasingly animated around the idea of “big tech censorship” and sought ways to rein in these companies. Florida lawmakers pushed through a law that would bar platforms from banning political candidates or risk hefty fines, but a federal judge last week issued a preliminary injunction blocking its implementation.

The Supreme Court ruled nearly a half-century ago that newspapers’ own First Amendment rights mean they cannot be required by state law to print political materials, such as rebuttals to editorials or endorsements. The same logic would apply to online platforms like Facebook and Twitter, defenders of the tech companies say.

“The top-line headline is: They all lost,” Goldman said. “The plaintiffs can’t win bringing those cases. They’ve tried all the arguments Trump tried and a whole bunch more, and they’ve gone nowhere. Ninety percent of those cases have failed at the motion-to-dismiss stage.”

Trump’s cases were assigned to three separate judges, possibly increasing Trump’s chances of a long-shot ruling in his favor at the trial court level.

The main law firm behind the cases is Greenwich, Ct.-based Ivey, Barnum & O’Mara, whose website does not claim any special expertise in internet or technology-related litigation. Among the attorneys signing onto the cases is Washington-based trial lawyer, John Coale, who worked closely with the Clinton White House in the 1990s on the tobacco settlement. Coale has since displayed eclectic political interests, advising figures such as former Govs. Sarah Palin (R-Alaska) and Martin O’Malley (D-Md.)

Nick Niedzwiadek and Josh Gerstein contributed to this report.