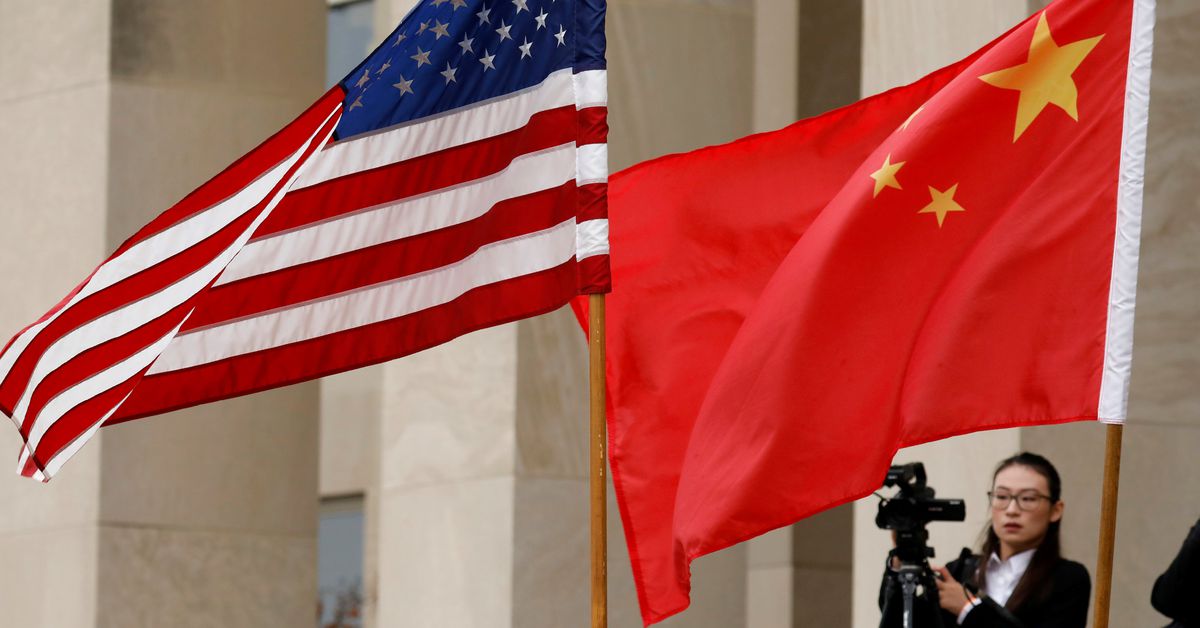 U.S. and Chinese flags are seen before a meeting between senior defence officials from both countries at the Pentagon in Arlington, Virginia, U.S., November 9, 2018. REUTERS/Yuri Gripas/File Photo

China should implement its commitments to equal treatment for foreign business and abandon “implicit” guidance to replace foreign products with domestic alternatives, the American Chamber of Commerce in China said on Tuesday.

In an annual white paper, the chamber, also known as AmCham, which represents 900 companies, also called on the United States and China to communicate more and cooperate on climate change and public health.

The relationship between the world’s two biggest economies deteriorated rapidly over the past few years over issues ranging from trade to China’s response to COVID-19.

“We feel that local officials are reacting to the levels of tension in the relationship and just taking the safer path which is to offer preference to domestic industry,” he said, speaking at a news conference on Tuesday.

American companies were also “rightfully concerned” about the possibility of consumer boycotts in China and needed to do scenario planning for it, he said.

In March Sweden’s H&M and other foreign brands met with a furious online backlash and boycotts after they raised concerns about forced labour in China’s western Xinjiang region.

Beijing has repeatedly said it treats foreign and domestic firms equally and welcomes foreign investment. The government is meanwhile also trying to spur domestic innovation and reduce reliance on foreign technology and markets.

Legislation promising equal treatment for foreign and domestic companies is only unevenly implemented, said the paper, which also called for emerging sectors like cloud computing to be opened up to foreign companies.

“The government should abandon the use of implicit, unpublished, or internal guidance to replace U.S. or other foreign-made products/services with domestically made equivalents,” it said.

U.S. President Joe Biden says competition with China is the greatest foreign policy challenge the United States faces. Democrats and Republicans alike have moved toward a harder line on Beijing.

U.S.-China tensions were seen as a challenge to doing business in China for 78% of companies polled by AmCham, according to a survey released in March.

U.S. Trade Representative Katherine Tai said last week she expected to engage “in the near term” with Chinese officials to assess their implementation of the Phase 1 trade deal between the two countries, with the outcome to influence the fate of Washington’s punitive tariffs on Beijing.

Tai and other senior Biden administration officials are conducting a top-to-bottom review of U.S.-China trade policy. Trump launched a tariff war between the world’s two largest economies in 2018. Washington and Beijing signed the Phase 1 trade deal in January 2020.

The pact, which expires at the end of 2021, called for China to boost purchases of U.S. exports by $200 billion over two years – a target that Beijing is far behind in meeting, partly due to the coronavirus pandemic.