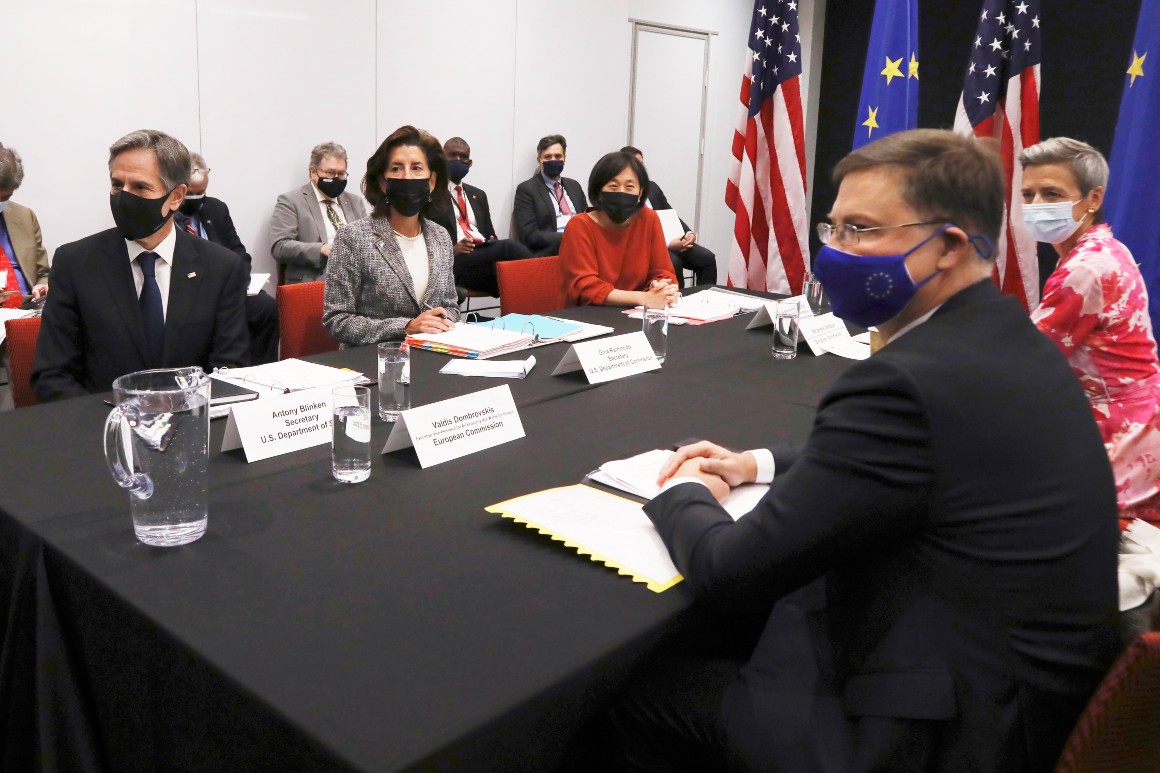 But much work remains to be done before the agreements reached at the summit lead regulators on both sides of the Atlantic to actually adopt complementary digital rules and to coordinate their enforcement actions against geopolitical rivals like China. The council will meet again next year, though a date has not been set.

“We can achieve a lot also in the next six months because now there is a sense of momentum,” Margrethe Vestager, the EU’s competition commissioner, added. “In the areas we’re dealing with here — trade and technology — these are fast-moving issues and fast-moving markets, so speed is of the essence.”

Wednesday’s joint statement did not explicitly mention China, though a number of its provisions seem clearly aimed at its market behavior. The EU and U.S. have been divided over the extent to which the council serves to align the longtime allies against China, in part because some EU member countries don’t want to rile Beijing.

EU Trade Commissioner Valdis Dombrovskis said the trading partners share concerns about China’s behavior in those areas. But Vestager added there are other issues on which they disagree, and there is an “understanding on both sides” that their individual relationships with Beijing are complex.

Several of the most nettlesome issues before the Trade and Technology Council remain unaddressed, at least until the next gathering, which will likely take place in spring 2022. That will buy the Biden administration and European governments some time to sort out their domestic priorities and smooth over recent diplomatic tensions.

Pittsburgh offered a symbolic backdrop for Wednesday’s meeting as an American city whose economy has pivoted in recent years from steel to tech. The council gathered in a converted mill that’s now a hub for advanced manufacturing and robotics.

The five co-chairs heard updates from 10 working groups tasked with finding common ground on key trade and technology topics and collected input on their broad slate of objectives from industry representatives, academics and civil society figures. That engagement is expected to continue in the coming months.

Rob Strayer, executive vice president of policy at the Information Technology Industry Council, urged senior officials to avoid national or regional rules for emerging technologies like artificial intelligence, and opt instead for standards that allow companies to more easily operate across borders.

“There is a lot of ambition. That’s a big scope of work,” Strayer said of the council’s agenda. “We have a lot of information about how they can be more compatible, so we’re really hopeful they’ll engage with industry throughout this process.”

The two sides pledged to take short-term steps to tackle the global semiconductor shortage, which has hobbled supply chains and the economic recovery.

Raimondo said the discussion over chips occupied a large portion of the day’s agenda. Participants agreed to share information about urgent supply shortages and “over time” to expand production and collaborate on research and development.

“We see this as an area of very fruitful collaboration give that our interests are aligned and our struggles are similar,” she said.

The parties will also look to police artificial intelligence, though there’s no guarantee that will lead them to devise similar regulations.

They also agreed to coordinate their efforts to screen investments and control exports on technologies with commercial and military technologies to prevent adversarial governments from using them in ways that undermine national security and human rights.

“There’s much more here than meets the eye,” said Karen Kornbluh, director of the Digital Innovation and Democracy Initiative at the Washington-based German Marshall Fund.

“There are clearly still tensions — the leaders need to reconcile this new vision with their domestic industries’ interests, which is why there’s less progress on semiconductors and platforms at this point than might have been expected,” Kornbluh said. “But given how much they’ve had to work on over the summer, this is a big deal — and they’re signaling more is to come.”

The fact the meeting happened at all is in some ways its own success after a diplomatic kerfuffle between the U.S. and France earlier this month threatened to derail plans. And the council’s success will depend on them overcoming several remaining hurdles.

The Trade and Technology Council was announced in June during President Joe Biden’s visit to Brussels and comes amid a broader push by his administration to reset the trade relationship with Europe after four fractious years under his predecessor.

But diplomatic disputes since then have eroded trust between the longtime trading partners. “There is a growing feeling in Europe — and I say this with regret — that something is broken in our trans-Atlantic relations,” EU Internal Market Commissioner Thierry Breton said last week.

France had lobbied to postpone the council meeting after it lost a multibillion-dollar submarine contract when Australia, the U.K. and the U.S. announced a new security alliance earlier this month. The French found some sympathy within the 27-member bloc, which was surprised by the announcement and felt left on the sidelines.

It took pressure from EU officials and overtures from the White House to keep the confab on schedule.

Even then, EU members haggled over a joint statement outlining the council’s commitments until the day before senior officials gathered in Pittsburgh. France, in particular, opposed a pledge to address the long-term shortage of semiconductors, delaying that agreement at least until top officials meet again in the spring, likely somewhere in France.

Cecilia Malmström, a former EU trade commissioner said “concrete cooperation is a way to build trust” between the U.S. and Europe. Washington could help to repair its relationship with Brussels by reaching a deal to lift steel and aluminum tariffs and pressing for reform at the World Trade Organization, she added.

Past efforts to align trans-Atlantic action on trade and technology matters have hit roadblocks, in part because the allies have legal systems and customs that are at times at odds.

“We have tried for many years to cooperate on standards and become more aligned,” said Malmström, now a fellow at the Peterson Institute for International Economics. “It is hard because we have such different systems.”

Doug Palmer contributed to this report from Washington, D.C.