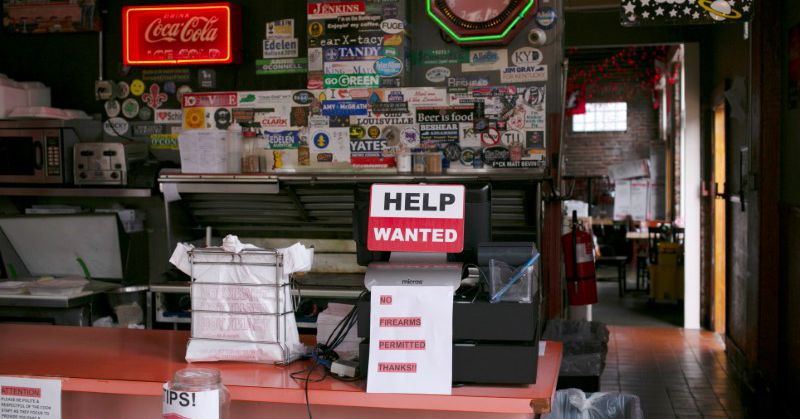 A hiring sign is seen at the register of Burger Boy restaurant, as many restaurant businesses face staffing shortages in Louisville, Kentucky, U.S., June 7, 2021. REUTERS/Amira Karaoud

Aug 10 (Reuters) – Small business owners across the United States grew less confident in the economic recovery in July as labor shortages remained an issue, according to a survey released on Tuesday.

The National Federation of Independent Business (NFIB) Optimism Index fell 2.8 points to a reading of 99.7 in July, almost erasing all of June’s gain. Six of the 10 index components declined, three improved and one was left unchanged.

“Small business owners are losing confidence in the strength of the economy and expect a slowdown in job creation,” Bill Dunkelberg, the NFIB’s chief economist, said in a statement.

While the economy is projected to expand this year at its fastest pace since the 1980s, there are signs it may be cooling. Supply chain bottlenecks continue to dent manufacturing growth, and consumer sentiment has declined recently amid concerns about inflation.

A net 27% of businesses plan to create new jobs in the next three months, down one point from the month prior, the NFIB survey showed.

Last week, the trade group said in its monthly jobs report that a record high 49% of small business owners reported unfilled job openings in July on a seasonally adjusted basis.

The quality of labor ranked as businesses’ “single most important problem,” with 26% of respondents selecting it among 10 issues, near the survey high of 27%, the NFIB said in its latest optimism survey.

“As owners look for qualified workers, they are also reporting that supply chain disruptions are having an impact on their businesses,” Dunkelberg said. “Ultimately, owners could sell more if they could acquire more supplies and inventories from their supply chains.”

Some 57% of respondents said they had few or no qualified applicants for open jobs in July, up one point from June.

Businesses in the NFIB survey also flagged inflation as a worry, with 44% planning to increase prices in the next three months, which was unchanged from June’s record high reading.