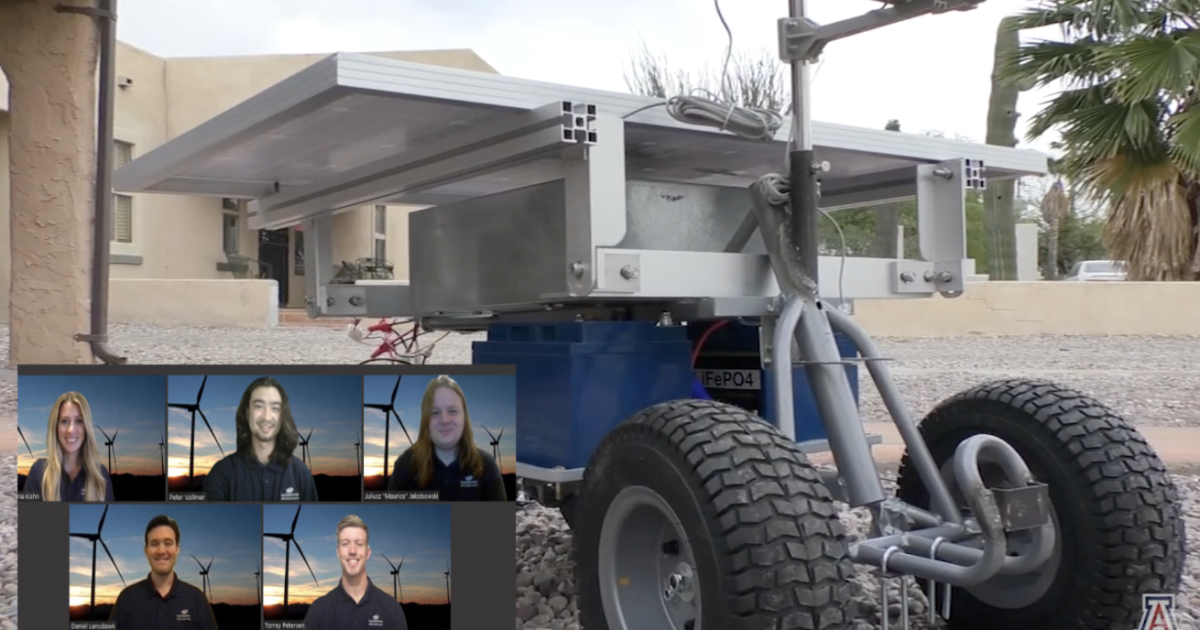 “I was just kind of shell shocked,” said Peter Vollmer, a mechanical engineer with the project.

The team of six students designed and built a rover to survey a wind turbine farm that TEP owns in New Mexico.

“They wanted to see if they were able to replace a physical person going out there because the closest substation or to TEP station is about six and a half hours away. And so they wanted to see if it was possible to create an autonomous Ai influenced robot to go and check to make sure that the wind turbines were working efficiently,” said Susannah Kohn, a mechanical engineer.

Ultimately saving TEP manpower and resources. So why New Mexico? TEP says the wind blows better in our bordering state where the wind farm is than it does in the Tucson area.

The students said it felt good to be recognized on a project so significant as this one that is bound to have a lasting impact.

“It took me quite out of left field, I wasn’t really um like expecting anything I kind of I guess set the set the expectation for myself low. Yeah so that was that was definitely exciting and shocking for me,” said Juliusz “Maurice” Jakobowski, a computer engineer.

“Just feels nice and kind of relieved as well, because we put in the Sony hours over the past year is such a huge project it’s Nice, knowing that paid off,” said Vollmer.

TEP has been a sponsor in this competition for several years and this is the first year a team it sponsored won.

“They put in some real terrific engineering, all the way through, and really followed the process and we need Innovation more of it like this, to address the future cleaner, greener grid that we want to build,” said Lynn.

And this research has already inspired others to adopt the same type of robotic application.

“Through U of A we were still able to develop a method of thinking and Problem Solving to help us reach a conclusion for our project,” said Torrey Petersen, an industrial engineer within the project.

“Yeah this class definitely feels like it was kind of the next step in kind of bringing whatever we had been learning to the next level or kind of to fruition,” said Jakobowski.

“Not only taking those lessons and experience of how do we apply ourselves in future industry but also we’ve learned a lot about ourselves in the process, how to work as a team and how we can also improve in the future as well,” said Daniel Lansdown, a mechanical engineer.

Click here to see the winning project and presentation.