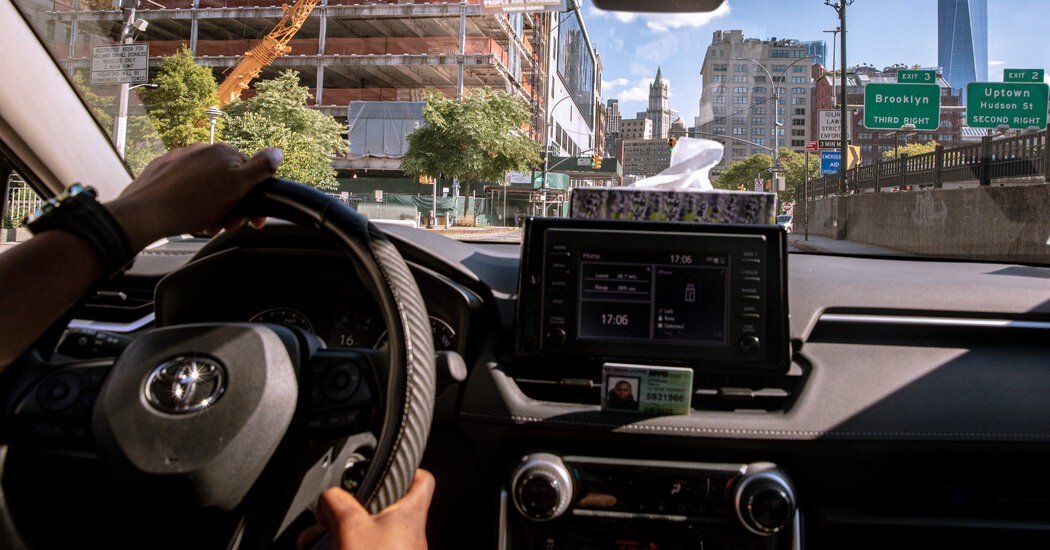 After California passed a law in 2019 that effectively gave gig workers the legal standing of employees, companies like Uber and Lyft spent some $200 million on a ballot initiative exempting their drivers.

To avoid such threats in other states, the companies have pressed for legislation that classifies drivers as contractors, meaning they are not entitled to protections like a minimum wage and unemployment benefits.

The most serious initiative in this vein, in New York State, has stalled while facing opposition from labor groups as the state’s legislative session winds down this week.

But the effort seems certain to be revived, and the negotiations — in which the companies offered to grant workers bargaining rights and certain benefits but not all the protections of employment — have indicated what an eventual deal could look like in New York and beyond.

Gig companies like Uber and Lyft have long resisted classifying workers as employees, stating in regulatory filings that doing so would force them to alter their business model and risk a financial hit. Industry officials have estimated that making drivers employees could raise labor costs 20 to 30 percent.

As California considered a bill under which gig drivers were likely to be classified as employees in 2019, the companies met repeatedly with a few large unions, including the Service Employees International Union and the Teamsters, to discuss a deal along the lines of what they have proposed in New York. But the talks collapsed because many in the labor movement refused to make significant concessions while holding the legislative upper hand. The bill passed in September of that year.

After the ballot initiative that exempted drivers was approved last fall, however, some in labor became more amenable to a deal. New York, where discussions were already underway, was a natural place to seek one.

Some of the companies had a relationship with labor in the state, chiefly the International Association of Machinists, with which Uber created and funded a driver organization in 2016, known as the Independent Drivers Guild. In some ways the drivers guild foreshadowed the arrangement the companies are seeking today: It provided a way for drivers to address concerns with the company but agreed not to contest drivers’ contractor status.

At the same time, labor had leverage. A number of rulings in New York granted gig drivers conventional unemployment benefits in the state, potentially leading to hundreds of millions of dollars in liabilities for the companies. And there were New York City regulations — like a minimum pay standard for drivers amounting to over $17 an hour after expenses — that some gig companies have sought to ease.

A legislative draft, produced by industry officials in consultation with labor groups, deemed gig workers to be “network workers.” That would essentially have made them contractors with certain protections and the right to join a labor organization that would bargain on a sectoral basis, meaning all at once with the major companies. The arrangement would have created more than 150,000 new union members in the state.

The bargaining would have happened separately for drivers and for delivery workers and would have covered a minimum wage, “portable benefits” like retirement contributions, and a process for appealing terminations.

But the details of the proposed unions raised eyebrows. As laid out in the draft, the companies would have signed an agreement with a single union giving it access to workers through corporate email systems. Once the union signed up 10 percent of the industry’s eligible workers and the state labor commissioner certified the arrangement, the union would have become the exclusive agent of all workers in the industry. No other union would have had a chance to represent them.

“The companies’ sectoral bargaining bill was drafted without workers’ input,” said Ligia Guallpa of the nonprofit Workers Justice Project, whose group has helped delivery workers build an organization that claims more than 10,000 members. “They don’t get to decide their own representation. It’s prearranged.”

Ms. Guallpa, like other labor leaders and worker organizers, said she found out about the proposal only in mid-May, after Bloomberg reported on its existence.

Aziz Bah, organizing director of the Independent Drivers Guild, said in a statement that “the choices about which union or unions to join rests with the workers.”

Critics also complained that funding for the union — potentially more than $20 million a year for the drivers union alone — would have come from the companies through a fee on rides that they collect, making workers feel beholden to the companies. And under the initial proposal, workers would have been prohibited from striking while they were bargaining with the companies, depriving them of a crucial source of leverage.

According to Kate Andrias, a professor at the University of Michigan Law School, some of those features were at odds with federal labor law, which typically bars unions that companies effectively select, fund or control. The law does not apply to contractors, however.

The proposal would have also replaced the conventional unemployment benefits that many drivers are currently eligible for with a new system that could have led to lower benefits and that could have been harder for workers to collect in certain situations.

And the proposal would have largely prohibited municipalities from regulating work done through ride-hailing or delivery apps, rolling back the driver minimum pay standard in New York City, though workers could have bargained for a floor as high as that minimum or higher.

The disclosure of the initial draft of the bill in May created a backlash against any proposal featuring weak unions, or unions effectively selected by the companies.

“They’re talking about the right to bargaining that’s a Trojan horse,” said Bhairavi Desai, executive director of the New York Taxi Workers Alliance, which helped drivers with ride-hailing services win unemployment benefits in the state. “That union would be complicit in giving them cover as they really seek to dominate the industry.”

Some labor groups involved in the discussions, like the state A.F.L.-C.I.O., became tepid in their support. John Samuelsen, the president of the Transport Workers Union, backed away fromthe proposal, citing concerns that workers wouldn’t be allowed to strike and opposition from delivery workers.

An Uber official who was not authorized to speak publicly said the company was open to changes that would make it easier for more than one union to represent workers in the ride-hailing or delivery industries. A subsequent draft eased restrictions on striking during negotiations with the companies.

Uber, Lyft and DoorDash said in statements that they remained interested in working with “stakeholders” on legislation.

But for all the opposition to the proposal, the episode suggested that some sort of deal remains possible in New York and other states where gig companies or industry groups have explored independent contractor legislation, including Illinois, Massachusetts and Connecticut, all with legislatures controlled by Democrats. Some of these states have policies allowing drivers to be deemed employees.

State Senator Diane J. Savino, who has been a key participant in the New York legislative efforts, said in an interview on Monday that she had recently reached out to a broader set of groups and that the discussion would continue in the coming weeks. “The clock may have run out on the legislative session, but it has not run out on the issue,” she said.

Critically, even many labor groups dismissive of the New York proposal have stopped short of insisting on all the rights and protections of employee status. “Their priorities are to have a living wage, have the right to organize and have more safety protections,” said Ms. Guallpa of the Workers Justice Project when asked how important it is to delivery workers to be classified as employees. “No one’s organizing around that issue.”

If the gig companies make more meaningful concessions, such as ensuring a more independent union, then a number of labor groups may be ready to take them up on it, ceding employee status in exchange.

“If large groups of workers see a pathway to improve their current economic situation by entering into initiatives that would allow them to form unions,” said Mr. Samuelsen of the Transport Workers Union, “then I’m with the workers.”