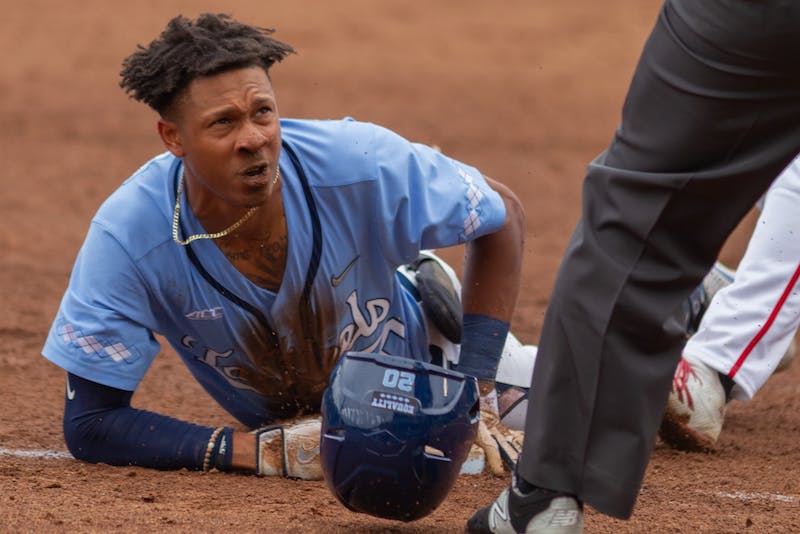 The Tar Heels did not go down quietly this weekend in Atlanta. For a young team fighting for an NCAA Tournament berth, Saturday afternoon represented one last chance to make its mark in the deciding game three of its final series of the regular season.

Taking advantage of the opportunity early in the game, UNC got the first run on the board in the top of the second, but that lead quickly vanished in the bottom half of the inning and into the third, after Georgia Tech responded loudly with nine runs in two innings.

To make matters worse for Tar Heels, the Yellow Jackets grabbed another run in the fourth — stretching their lead to 10-1.

“We got ahead, I believe 1-0, and they came right back and punched us,” head coach Scott Forbes said. “Then you give up a six-run inning and nobody could come in and stop it.”

The Tar Heels looked beaten down early, but they still had plenty of fight left in them. After the early offensive onslaught by the Yellow Jackets, UNC began to inch its way back into the game in the fifth inning.

The Tar Heels responded with a solo home run off the bat of star center fielder Justice Thompson at the top of the inning. After the homer, the Tar Heels added another run off of a sacrifice fly from first-year Johnny Castagnozzi to make it a seven-run deficit heading into the seventh inning.

The score remained steady through the next two frames until the Tar Heels scored three more runs in the top of the ninth, but they eventually fell short of the Yellow Jackets, 10-6.

Despite the loss, the team showed the same resiliency it has shown all season. That ability to battle back will be huge for the Tar Heels as they head into the ACC Tournament next week.

“I think from past experience, what it takes to win in the postseason is just that resiliency,” Tar Heel ace Austin Love said. “Getting down early in the game and just being able to bounce back from those spots and do what we’ve done the past couple of weeks has definitely shown that we’re capable of coming back in any game that we’re in.”

This season hasn’t been easy for any team, particularly those playing in the hyper-competitive ACC. A pair of projected weekend starters, first-year Max Carlson and junior Joey Lancellotti, have been out with injury for the latter half of season. It is not a feat to take lightly that the Tar Heels finished the regular season with their heads above water considering all of the challenges of this year.

Forbes knows this all too well, having seen the tough teams come in week after week to face his young squad during his first season as head coach for the Tar Heels.

The Tar Heels’ regular season record may not show what they are fully capable of, but their leader, Love, believes the tough schedule has prepared them for what lies ahead.

With the ACC Tournament set to begin Tuesday, the Tar Heels are aiming for the fences heading into postseason play.

“We’re going to play with that chip on our shoulder,” Love said. “Everybody since the beginning of the year hasn’t put us in the field of 64, and it probably hasn’t changed now, so we’re going to go into the ACC Tournament with that chip and we’re gonna look to win the whole thing.”