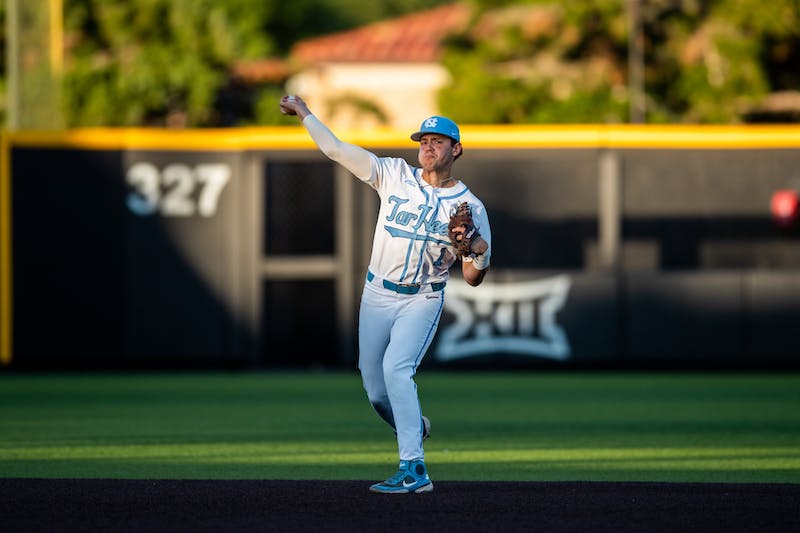 It didn’t take long for either team to get on the board in front of a sizable crowd at Rip Griffin Park on Saturday night. In the top of the first inning the Red Raiders took an early 2-0 lead off of a two-run homer from first-year second baseman Jace Jung. After falling behind early, the Tar Heels got things rolling in the bottom half of the inning, scoring their first run of the game off of a fielder’s choice RBI from first-year Mac Horvath to cut the deficit in half.

The score remained steady through the second, but the Tar Heels struck again in the bottom of the third, tying the score up 2-2 off of an RBI double from sophomore Danny Serretti. Two runs would be all the Tar Heels could muster off of a stellar pitching performance by the Red Raiders, but things were just getting started at the plate for the host team. In the top of the fifth, Texas Tech broke the tie, scoring their third run off an RBI double from junior Braxton Fulford.

The Tar Heels came close to taking the lead in the bottom of the sixth, after Horvath sent a pitch off the top of the left field wall, but he was tagged out on the way to second. The tying run was left stranded on third base after consecutive strikeouts ended the inning, and UNC was sent back to the dugout scoreless in the frame.

After the Tar Heels failed to take advantage of their opportunity, the Red Raiders extended their lead to 4-2 in the seventh, off of their second homer of the day from junior Kurt Wilson. Texas Tech capped their scoring off in the eighth, scoring three more runs off of a bases-loaded walk and a two-RBI single from Wilson.

The Tar Heels got a runner on in the bottom of the ninth, but junior Ryan Sublette shut the door for the Red Raiders, capping off a stellar 3.2 innings of relief with two strikeouts to secure the 7-2 win for his team.

Things were slow at the plate Saturday for the Tar Heels. Serretti and Horvath drove in the only runs of the game and redshirt-sophomore Angel Zarate finished with the only two-hit performance, going 2-3. Shawn Rapp led the way on the mound, pitching 4.2 innings of two-run ball while striking out seven Red Raider batters along the way.

For Texas Tech, Wilson and Jung provided the spark at the plate — driving in five total runs on four hits. On the mound, the Red Raiders got stellar performances from redshirt-senior Patrick Monteverde and Sublette who combined for 15 total strikeouts.

When was it decided?

Texas Tech blew things open in the top of the eighth, scoring three runs to extend their lead to 7-2. On a slow night at the plate for the Tar Heels, the five-run lead ended up being insurmountable late in the game.

Why does it matter?

After taking game one against UCLA, the loss Saturday night places the Tar Heels in the loser’s bracket. The Tar Heels will now need two wins on Sunday to stay alive in the NCAA Tournament.

When do they play next?

The Tar Heels will be back in action Sunday for their third game of the Lubbock Regional in an elimination game rematch against the UCLA Bruins. First pitch is scheduled for 3 p.m.