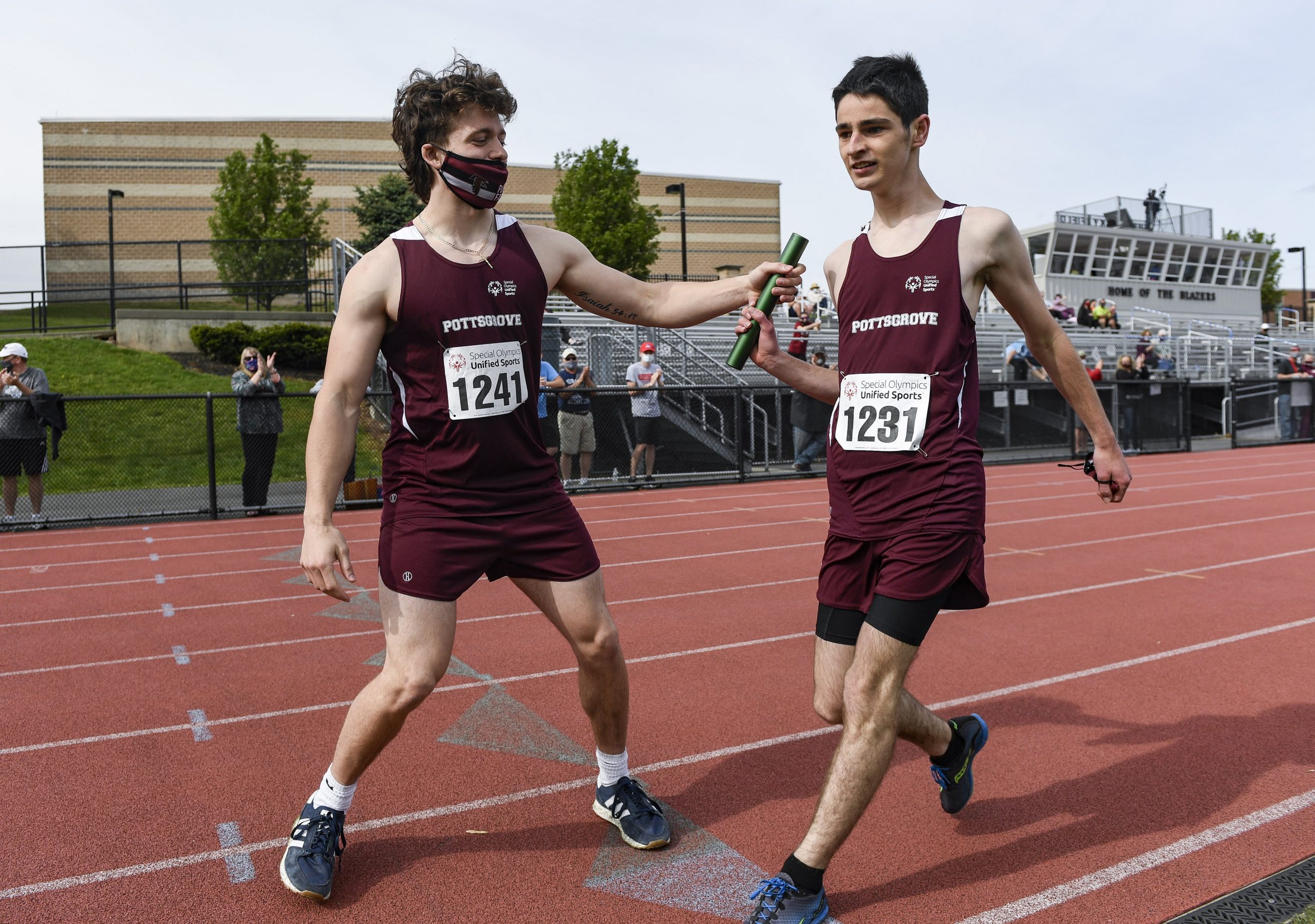 It can be a hard concept to understand: Everyone participating in an athletic event coming away a winner.

But that’s happening around the region, thanks to Special Olympics Interscholastic Unified Sports.

The fledgling program — it’s in its first full year locally — is affording “special” student-athletes the opportunity to compete in smaller-scale track and field meets where the emphasis is on effort, and the adulation of the athletes, their coaches, schoolmates and families is the reward.

SOPA is working with 91 schools in 12 counties, Philadelphia, and Pittsburgh to provide IUS programs for indoor bocce, track and field and soccer. Over the course of four years, Special Olympics Pennsylvania seeks to build a network of partnerships with school districts which encompass all areas of the state.

The goal is to have high schools throughout Pennsylvania offer Interscholastic Unified Sports (IUS) opportunities in at least two Unified Sports.

“By providing opportunities for students, both with all types of disabilities and without disabilities, to participate in sports meaningfully and by engaging other students in the school community, Interscholastic Unified Sports (IUS) helps promote inclusion, acceptance and respect,” the organization’s mission statement said.

The program has taken off in a big way locally.

Unified track and field teams have been established at Daniel Boone and such Pioneer Athletic Conference schools as Methacton, Perkiomen Valley, Pottsgrove, Spring-Ford and Upper Merion. Team rosters can number at least 12 athletes, but not exceed 40.

“It creates an environment that’s inclusive and supporting,” Traci Huddleson, head of the Boone Unified team, said during a meet with Pottsgrove Thursday her school hosted. She credited such school administrators as athletic director Eileen Schmidt and principal Aaron Shorz with getting the program going.

“It’s amazing,” she said. “Through COVID, we had growth as athletes and a team. The high school track team members were out being supportive.” Pottsgrove’s Unified sports program had its inception two years ago, the product of athletic director Steve Anspach’s attendance at a high-school football game hosted by Souderton.

“I saw their (Souderton) school doing a fundraiser during the game,” he recalled. “I asked about it and learned about Unified sports, in which Souderton participates.”

Linette Coddington and Maria Steinmetz oversee the Pottsgrove team, whose formation was enthusiastically embraced by Anspach and the Pottsgrove administration. The COVID-19 pandemic in 2020, however, prevented Pottsgrove from getting any kind of season going.

“When it was put out, we were one who was interested,” Coddington said.  “Unfortunately, we didn’t get far.”

The team’s numbers increased only slightly in 2021. Hope exists, however, for more student involvement next year.

“Seeing the outcome is a big thing,” Coddington said. “The numbers hopefully will increase”

One competing athlete, Grace Habecker from Daniel Boone, pointed to one of the principal aspects of the Unified competition,

“Our goal as team collectively,” she said, “was to make Pottsgrove feel super welcome.”

Habecker competed in the 400 and long jump. Her satisfaction with her performance was obvious.

“I got in the pit, which is awesome,” she said in describing her long-jump showing. “In the 400, I ran hardest.

Ryan Sullivan, among the spectators present at the Daniel Boone meet, has more than just a professional interest in Unified track. The veteran head coach of the Perkiomen Valley boys and girls cross country teams has a son, Quinn, who’s a member of the Pottsgrove team.

“They’re supportive of each other,” Sullivan noted. “The kids have fun. It’s good.”

In the meet, Quinn competed in the long jump and ran the third leg of Pottsgrove’s 4×400 relay. He’s also run the 400 in some meets, and has a 7-foot-9 best in the long jump. Members of the Pottsgrove team line up to be introduced before the start of Thursday’s Special Olympics Unified Track Meet. (Ben Hasty – MediaNews Group) Those sentiments resonate with Special Olympic Unified representatives like Ashley Herr and Jason Merola, who were both in attendance at Boone Thursday. Herr oversees the region that encompasses Berks, Bucks, Chester and Montgomery counties while Merola’s region includes the Greater Lehigh Valley and the Poconos.

She noted the impact of the COVID-19 pandemic, and its forcing the shutdown of sports programs in the spring and summer of 2020, posed a challenge to the program. At the same time, it hasn’t dampened the enthusiasm of school districts to be part of the conversation.

“COVID was a huge challenge. We had schools signed up, then they were quarantined,” Herr said. “But there’s a waiting list of schools wanting to get involved. Funding is also a factor.”

“Our schools got some meets in,” Merola added. “A lot were virtual.”

At Perkiomen Valley, the circumstances behind its formation of a Unified Sports program mirrors that of other local districts. Emily Witman, head coach of the team, noted the district’s administration and school board, along with recently-retired high school athletic director Larry Glanski, put their support behind the program.

“Larry came to me and asked me to coach,” she recalled. “I did this when I was in college.”

“It was hard to start due to COVID,” Witman said. “Some students were uncomfortable about that.”

The next phase for Unified Sports will be regional meets. Spring-Ford and Pottsgrove will be serving as hosts for two of the meets, Souderton a third.

Spring-Ford will compete against teams like Lower Moreland and Haverford Monday (May 10). Pottsgrove will go against Boone and Springfield Township May 17.

The Souderton regional May 18 will include Methacton, Upper Merion and Upper Dublin.

The regional meets will be followed by a “virtual” state meet. At this level, the champion regional teams will compete at their home sites, with the results compiled and calculated by the state organization.

Anspach recalled being approached, while attending Pottsgrove’s meet at Spring-Ford, about his school hosting a regional championship meet.

“I was asked if we were interested in doing it at Pottsgrove,” he said. “I got the support of the administration and school board for it.”

To Anspach, the response of the Pottsgrove students to the Unified program made support of the request obvious.

“It’s awesome, every day seeing the kids practice,” he said. “They love it … the opportunity to compete and have fun, with support.”