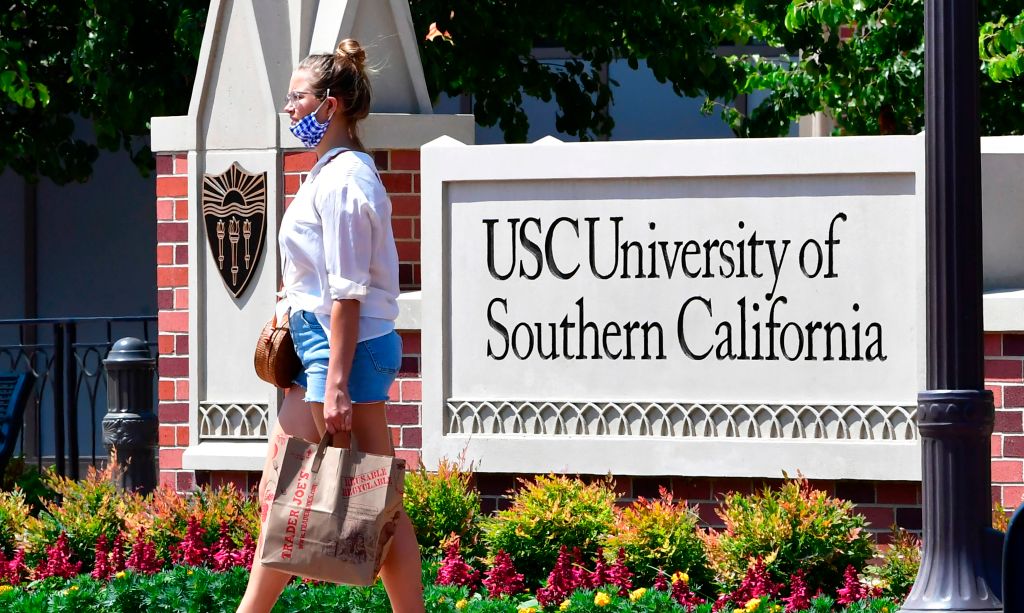 A woman walks past a sign at the University of Southern California (USC) in Los Angeles, California, as seen in August 2020. (Photo by Frederic J. Brown—AFP/Getty Images)

Women are taking over business schools from coast to coast. The University of Southern California’s Marshall School of Business announced Tuesday that its undergraduate business administration degree program has—for the first time—reached gender parity in its first-year class. In late July,  the Wharton School of the University of Pennsylvania became the first M7 school to welcome an MBA class composed of more women than men.

USC Marshall’s class of 2025 has 4,193 students, 52% of whom are women. This “represents a real milestone on our path to giving women access to the skills, network, and opportunities they need to realize their highest aspirations as business leaders,” Geoff Garrett, USC Marshall’s dean, said in his announcement.

“I see this as more of a milestone than a finish line,” Ramandeep Randhawa, USC Marshall vice dean for undergraduate programs, tells Fortune. “We’re not done.”

Randhawa, who has been with USC Marshall for about 13 years (first as a professor), took his role shortly after Garrett became dean. Together, they’ve worked to achieve gender parity. Garrett and Randhawa also worked with USC admissions, which “built intentional and strategic messaging to encourage outstanding women students to choose Marshall,” Tiffiani Frye, Marshall’s director of undergraduate admissions, said in the announcement.

“Society is becoming more than profit margins,” Randhawa added. “It’s important for us to make sure that our student body is trained to succeed in that environment, which involves creating a class that is as real-world as possible.”

How USC Marshall has attracted more applications from women

First, the school has seen an uptick in applications from women over the years, but Randhawa also believes it reflects the trend of businesses looking to hire more women to achieve better representation in the C-suite. “It was bound to happen,” he adds.

The admissions team also highlighted USC Marshall’s “differentiators,” which include its women faculty and scholarships aimed at women students to lure female applicants.

Vaanyasri Goel, a senior business administration student at USC Marshall, says that this achievement illustrates what the school stands for: equality and empowerment. As an international student from India, Goel has made her mark on Marshall, and in 2020 became the president of the school’s Women’s Leadership Board.

USC Marshall is where she was made to believe in herself, she tells Fortune. Since 2018 when she came to Marshall as a freshman, she’s had the chance to explore strategy and finance, two fields that are predominately male dominated. She’s held internships with Accenture, a Global 500 company, and Amgen, a Fortune 500 company. USC Marshall and the Women’s Leadership Board have served as a launchpad for females looking to enter those fields, she says.

The gender parity milestone sends an important message within academia—and to those companies that want to hire Marshall students straight out of undergrad, Goel says. “It is going to set an example for not only other universities, but also organizations within Marshall.”

See how the schools you’re considering landed in Fortune’s rankings of the best executive, full-time, and online MBA programs.