What Cuomo’s Resignation Means for Business – The New York Times 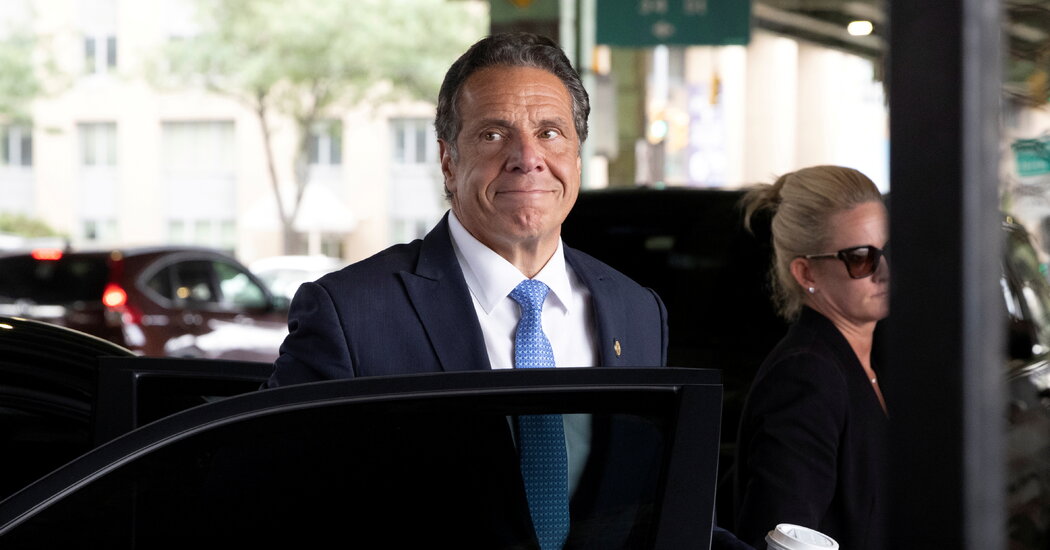 The news was notable for many reasons, not least that Cuomo was a purported supporter of the #MeToo movement. (In his resignation speech, the governor took responsibility for his actions but denied ever touching anyone inappropriately.) For more on how “the Cuomo story demonstrates the durability of the movement,” read The Times’s Jodi Kantor in our sister newsletter The Morning.

When Cuomo steps down in two weeks, the lieutenant governor, Kathy Hochul, will step up, becoming the first woman to occupy New York State’s top office. For the state with the country’s financial capital, a new leader has implications for business, too.

On the pandemic. Amid a resurgence of coronavirus cases, up nearly 90 percent in the state over the past two weeks, how Hochul addresses vaccine mandates, mask rules, testing and related measures will be closely watched by companies rethinking their own policies, in New York and the country as a whole. Cuomo left broad mask and vaccine mandates up to city and local governments to decide, but Hochul hasn’t said whether she would do the same. She has backed keeping schools open and in person.

On big business and Wall Street. Cuomo had his enemies on Wall Street, some dating back to his time as attorney general after the financial crisis. “Ding, dong, the witch is dead,” tweeted Steve Rattner, one of those foes. But Cuomo’s focus on financial support for ambitious real estate projects, charter schools and other initiatives won support from business leaders. Before becoming lieutenant governor, Hochul did a stint in government relations at M&T Bank.

On taxes. Hochul has generally positioned herself as a small-tax Democrat, campaigning to cap property taxes and saying that the federal government’s removal of the state and local tax deduction is unfair to New York.

The unanswered questions. There are pending infrastructure projects, like a controversial plan to build an AirTrain to La Guardia Airport, that Hochul may manage differently than her predecessor. But the biggest question circulating last night among some big Democratic donors was about who will run for governor in 2022. Hochul? Bill de Blasio? Letitia James? Hakeem Jeffries? Hillary Clinton? For the business lobby, there isn’t a clear choice yet, but the suddenly open race is set to dominate discussion.

The Senate passes a $1 trillion infrastructure bill. The bipartisan bill, which passed with 69 votes yesterday, would be the biggest allocation of federal funds to roads and bridges and other projects in more than a decade. Then, around 4 this morning, the chamber passed a $3.5 trillion budget blueprint along party lines. Both measures now go to the House.

Inflation is set to come in hot. A report due today is expected to show another big gain in prices in July, probably around 5.3 percent, complicating Fed policy and posing a political liability for the Biden administration’s expansive spending plans.

Coinbase rides cryptomania to a $1.6 billion quarterly profit. The nearly 4,900 percent year-on-year rise in profit shows that building a large — and profitable — cryptocurrency exchange is possible. “Crypto has arrived,” Coinbase wrote to shareholders, in its second earnings report as a publicly traded company.

Dominion wages war on far-right news media over disinformation. The voting machine company that became a target of baseless conspiracy theories about the 2020 presidential vote is seeking $1.6 billion in damages in each defamation lawsuit filed against Newsmax, One America News and Patrick Byrne, the former C.E.O. of Overstock. The company previously started proceedings against Fox News, Rudy Giuliani, the MyPillow chief executive Mike Lindell and the pro-Trump lawyer Sidney Powell.

Instagram rolls out new features to combat racism, as Facebook faces criticism for inaction. English soccer officials waged a two-year campaign to pressure Facebook and other social media companies to do more to prevent online abuse of players, with insufficient results, according to sources and internal documents obtained by The Times. The changes to Instagram, introduced today, makes racist material harder to view.

Robinhood, the popular trading app for small investors, is acquiring Say Technologies, which specializes in digitizing shareholder votes, for $140 million.

Many retail shareholders don’t vote, buying shares but then not exercising their power to have a say on things like executive pay packages and who sits on a company’s board. Nell Minow, a shareholder rights and corporate governance expert, said that making it easier for Robinhood’s users to vote their shares could shake up corporate boardrooms just like when millions of traders used the app to send meme stocks soaring this year.

“Robinhood was at the kindergarten stage when it came to democratizing Wall Street, and this moves it up to at least the first year of high school,” Minow said. Individuals acting together could compel companies to take the lead on environmental and social justice issues, she said.

But small investors tend to side with management more than institutional investors do, said Jonathon Zytnick, a research fellow at the Institute of Corporate Governance and Finance at N.Y.U. Law School. “Voting methods matter a ton getting retailer shareholders to vote,” Zytnick said. “And retail investors can perform a monitoring role, but at least right now, it is almost certainly wrong to think of this as a means of environment and social change.”

But if there’s anything that the past few months have taught us, the behavior of big crowds of small investors is hard to predict.

Companies are increasingly mandating coronavirus vaccines for their employees. This is legally allowed, and has been held up in court challenges. But for various reasons, not all employers have applied blanket mandates. Here are four of the common approaches that have emerged:

Microsoft requires vaccines for all U.S. employees. The tech company, which employs roughly 100,000 people in the U.S., said in early August that it would require proof of vaccination for all staff, vendors and guests to enter its offices.

Walmart requires vaccinations for some, but not all, of its employees. The country’s largest private employer mandates vaccines for office workers at its headquarters and for managers who travel in the U.S., but not for the majority of its employees, who work in its stores and warehouses.

Delta Air Lines requires vaccinations for new hires. It is unclear how many workers this policy will ultimately affect. The airline industry, like others, is facing a labor shortage.

JPMorgan Chase encourages, but does not require, vaccinations. Until recently, this approach was the default, with companies offering incentives for vaccination, such as cash bonuses, instead of mandates. On Friday, JPMorgan announced that unvaccinated employees would be required to complete coronavirus tests twice a week.

The $1 trillion infrastructure bill passed in the Senate yesterday includes a tax-reporting provision that cryptocurrency supporters fought to remove, generating multiple amendments and lots of headlines. But those changes got blocked, and the original language in the bill survived, which defines “broker” for the purposes of crypto transactions in an overly broad way, according to detractors.

The crypto lobby, having mounted a spirited but unsuccessful campaign, vowed to use its power to fight another day, on the tax provision as well as other challenges to its industry, like increased scrutiny from the S.E.C.

“In my view, the legislative priority should center on crypto trading, lending and DeFi platforms,” Gary Gensler, the S.E.C. chair, said in a letter released today by Senator Elizabeth Warren, Democrat of Massachusetts. She had asked him about the risks of decentralized finance, or DeFi, a booming, $80 billion sector that eliminates middlemen from financial transactions through automation. Gensler echoed the remarks he made in a straight-talking speech this month laying out his priorities for regulating the “Wild West” crypto industry.

The S.E.C. chief is also worried about “stablecoins.” The market in these tokens pegged to the dollar or other currencies is worth about $115 billion, Gensler noted, and last month, nearly three-quarters of all trading on crypto platforms involved stablecoins. This “may facilitate those seeking to sidestep a host of public policy goals connected to our traditional banking and financial system: anti-money laundering, tax compliance, sanctions and the like,” he wrote.

The fight over the tax provision in the infrastructure bill was an “amuse-bouche,” said Miller Whitehouse-Levine, the policy director of the DeFi Education Fund, a new nonprofit initiative dedicated to this sector. Crypto supporters realize that they will have to “educate” officials in Washington and beyond, Whitehouse-Levine said.

The infrastructure bill is now with the House, where there is another chance to change the tax provision, though there’s no path to an amendment yet, said Perianne Boring of the Chamber of Digital Commerce. Assuming passage, the I.R.S. would write detailed guidance before the law goes into effect in 2023, and the crypto industry’s arguments reflected in the legislative record could influence the agency’s interpretation. In the meantime, as Gensler’s letter suggests, the industry’s growing might will invite additional scrutiny.

We’d like your feedback! Please email thoughts and suggestions to [email protected].com.