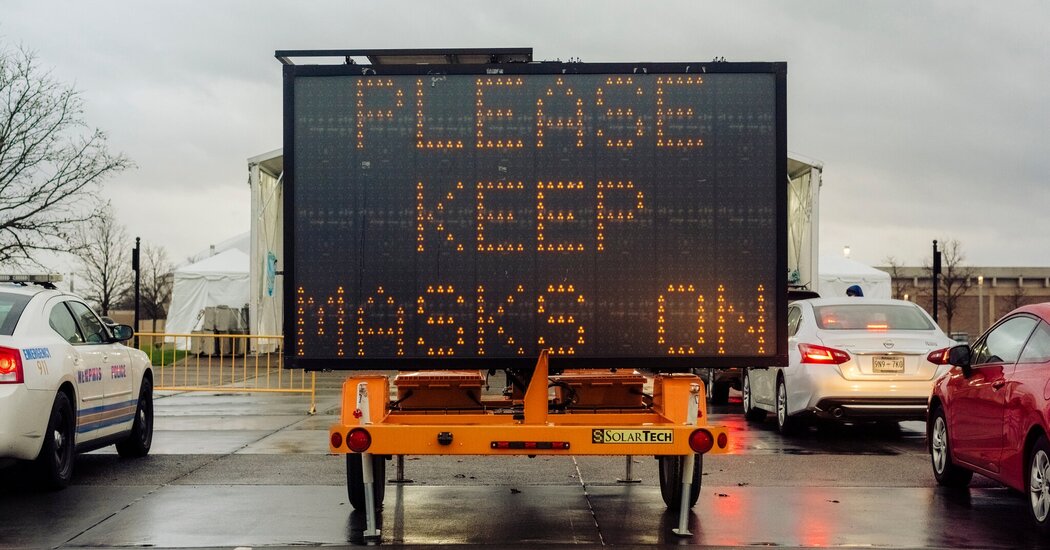 Want this newsletter delivered directly to your inbox? Sign up here.

The C.D.C. surprised health experts, political leaders and others yesterday when it announced that vaccinated people could go maskless in most places, including indoors. The agency’s advice doesn’t override local and state rules, though at least seven states adopted its mask guidelines. Others, like New York, said they would study the new guidance before deciding whether to adopt it. That puts businesses in a tricky spot.

Companies with frontline workers aren’t sure what to do. Retailers like Macy’s and the Gap said they were reviewing the new guidance, while Home Depot has not changed its rules requiring customers and workers to wear masks in its stores. Airlines and other transportation companies didn’t need to react, because federal guidelines still require masks for their industry.

Unions are unhappy about it. “Millions of Americans are doing the right thing and getting vaccinated, but essential workers are still forced to play mask police for shoppers who are unvaccinated and refuse to follow local Covid safety measures,” the president of the United Food and Commercial Workers International Union, Marc Perrone, said in a statement. “Are they now supposed to become the vaccination police?”

H.R. departments have yet another headache. Companies coming up with protocols for a return to the office haven’t prepared for the C.D.C.’s sharp turnabout, Douglas Brayley, an employment lawyer at Ropes & Gray, told DealBook. Companies need to abide by local guidelines, but the change in federal guidance raises questions. How do large companies establish a common policy when local public health agencies may not agree? How to handle employees who are still uncertain about safety when protocols shift? How will companies find out whether employees are vaccinated, and thus determine if they need to wear a mask?

And what about the Yankees? Eight fully vaccinated members of the baseball team tested positive for the virus. Some may interpret it as a lesson for businesses when workplaces loosen their protocols for things like masking, even if a majority of employees are vaccinated. “For a little bit there, we were getting pretty comfortable, because that’s what the rules called for. Now, we’ll tighten it back up and hopefully everyone stays safe,” the Yankees pitcher Jameson Taillon told The Times. Others argue that the Yankees’ frequent testing makes asymptomatic cases more likely to be caught, and given that only one of the eight has shown symptoms, it’s a sign that the vaccines are effective.

What are the rules where you are? See reopening plans and mask mandates for all 50 states.

Colonial Pipeline paid a $5 million ransom to hackers. The payment, made in Bitcoin, came shortly after the company shut down its network — and, as a result, the pipeline that supplies almost half of the East Coast’s fuel — in response to a ransomware attack. In other hacking news, Ireland’s health system operator shut down today because of a ransomware attack, and a unit of Toshiba said that it had been targeted by DarkSide, the group blamed for the Colonial infiltration.

McDonald’s is raising its wages, sort of. After moves by other fast-food chains, the company will increase pay at its 650 company-owned restaurants to an average of $13 per hour. But about 95 percent of McDonald’s restaurants in the U.S. are independently owned and will not be affected by the move.

A major teachers’ union called for schools to reopen. Randi Weingarten, president of the American Federation of Teachers, which has 1.7 million members, said of the next academic year, “There is no doubt: Schools must be open. In person. Five days a week.” Teachers’ unions have sought strict virus mitigation measures that some say have slowed reopening timelines.

Delta will require new hires to be vaccinated, making it one of the first major corporations to enact such a provision. The airline’s C.E.O., Ed Bastian, told CNN that the requirement wouldn’t extend to current employees, but he said that he expected up to 80 percent to get shots.

DoorDash tripled its revenue in the first quarter. Demand for food delivery does not seem to be dropping as restaurants reopen dining rooms. “The negative impact that we were expecting in consumer behavior was smaller than we were anticipating,” the company’s C.F.O., Prabir Adarkar, told The Wall Street Journal.

The crypto exchange Coinbase yesterday held its first earnings call since going public. Its bumper profit for the first quarter largely matched expectations set in its filings ahead of its I.P.O. last month, so the numbers didn’t raise many pressing questions from investors, who were able to submit queries online and vote for their favorites to put to management.

“When will users be able to trade Doge?” Of more than 100 shareholder questions, one about Dogecoin, the high-flying crypto token based on a meme, was, inevitably, the most popular and so it was asked first. “We plan to list Doge in six to eight weeks,” said Coinbase’s C.E.O., Brian Armstrong, noting that the company was looking to expand its assets and aimed to list new products faster.

Coinbase says it won’t be too hasty. Armstrong noted that “certain products” that the exchange’s competitors allow users to trade make Coinbase “uncomfortable,” whereas “from the earliest days,” the company embraced regulation. Indeed, Coinbase representatives just met with regulators in Washington, Armstrong said, providing no specifics.

Armstrong loves an internet reference. The company’s co-founder referred to this period in the crypto industry as similar to the internet’s infancy at least three times and at one point likened Coinbase to Google. The exchange welcomes competition, he said, just as “in the early days of the internet, Google wanted more websites out there.” But Coinbase isn’t looking to compete with rivals on fees, so if users had dreams of trading for free, as on the Robinhood app, they were dashed. “We do not believe in fee-less crypto trading,” Haas said.

“The fortune of Bill Gates and Melinda French Gates exceeds the size of Morocco’s annual economy, combines the value of Ford, Twitter and Marriott International and is triple the endowment of Harvard. While few know how their wealth will be divided in the divorce, one thing is clear: breaking it up can’t be easy.”

— The Times digs into the Gates family fortune, estimated to be worth at least $124 billion, which includes a stake in the Four Seasons hotel chain, huge tracts of farmland, a beachfront mansion in Southern California and one of Leonardo da Vinci’s notebooks.

Some of the academic research that caught our eye this week, summarized in one sentence:

‘To our clients’ — Marty Lipton’s letters

Martin Lipton is one of the most consequential figures in modern corporate finance. Throughout the 89-year-old’s career as a high-powered M.&A. lawyer, he has chronicled the ups and downs of deal making in thoughtful and widely followed notes to clients, known as “Marty Memos.” The notes, which span poison pills, shareholder primacy and the purpose of companies, are now available in a digital archive.

The back story: Leo Strine, former chief justice of the Delaware Supreme Court and now at Wachtell, Lipton, Rosen & Katz, helped create the archive. “It has taken several years to do the coding of the memos, to draft a narrative that situates ML’s work in historical context, and that also, critically, provides links to the key cases, regulatory developments and scholars and advocates involved in the policy debates in which ML participated,” Strine said in an email. He worked on it with teams at Wachtell and Penn Law, where he teaches. An in-depth essay that serves as a guide to the archive, “Lipton and His Impact,” is the place to start.

Here are two of our favorite letters. One comes from the 1980s takeover era, when junk bonds drove Wall Street and the poison pill was invented by Lipton in response, and the other from more recently, 2018, in which Lipton frames his early thinking on anti-takeover measures in the context of focusing on all stakeholders, not just shareholders: