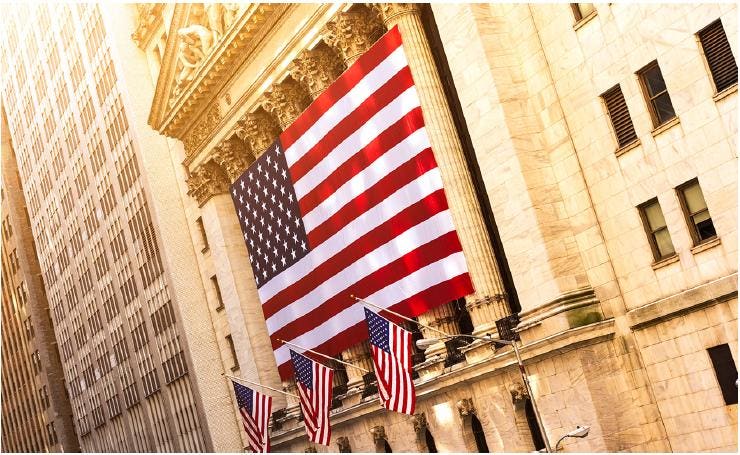 September has a bad reputation around Wall Street. It’s living up to that so far as last week was the worst in three months, but some green shoots pushed through the sidewalk cracks this morning as eyes turn to the Tech sector after a ragged Friday.

Stocks enter the week on a five-day skid as investors assess historically high valuations and the possibility of a more hawkish Fed. Another factor has been rising caseloads of Covid’s Delta variant, something that has many analysts rethinking their calculations for U.S. economic growth. Apple (AAPL) and Alphabet (GOOGL), two of the biggest companies by market-capitalization, had a hiccup Friday on bad news (see more below), adding to the weight.

Over the last few days, however, the average daily number of cases has started falling, according to government data. That appears to have raised a bit of hope in overnight trading as major indices popped back up following some early directionless action. The pre-market rebound was accompanied by a fall in volatility after it roared to three-week highs at the end of last week.

It’s a nice recovery this morning, but we saw this movie a couple of times last week where things started off hot and then quickly got cold. The question is whether the market can pick up any follow-through buying after the first half hour or so.

Checking back over the last week of performance, it’s just a sea of red. Only one of the 11 S&P 500 sectors rose in the last five sessions, and that was Consumer Discretionary—up a tiny 0.22%. The big cyclical sectors like Financials, Industrials, and Materials had the worst performances, while the overall S&P 500 Index (SPX) fell nearly 1%.

Friday’s stumble threw a wet blanket on things heading into the weekend as selling picked up toward the close. A few negative notes about the overall market from major investment banks might have been a factor.

One school of thought is that we haven’t had a major sell-off in a long time, raising concerns that the market might be due for one. The counter-argument is that despite the recent weakness, a lot of analysts continue to say U.S. stocks are one of the better games in town compared to other potential investments. With inflation as high as it is now, investments in fixed income, for instance, would lose value at current yields.

All this selling evidently has investors worried, as the Cboe Volatility Index (VIX) stormed to big gains in the late hours of Friday’s session to finish above 20 for the first time in almost a month. VIX hasn’t been able to maintain gains above 20 for very long recently (see chart), but a few days above 20 might indicate investors are truly concerned about more turbulence ahead.

On Friday, it certainly didn’t help that most of the so-called “mega-cap” stocks like AAPL, GOOGL, and Microsoft (MSFT) lost ground as the old week expired. Stocks like these have so much weight in the SPX that when they sneeze, the market often catches a cold.

Soft Spot on the Apple

With AAPL, the sneeze appeared to reflect investor disappointment over a U.S. federal judge’s ruling that, according to The New York Times, “struck a serious blow to Apple’s control of its App Store, giving companies a way to avoid handing Apple a cut of their app sales and potentially upending a $100 billion online market.”

The judge’s decision was part of the ruling in a case between AAPL and Epic Games, a privately-held company which makes the popular game Fortnite and sued AAPL last year over its App Store policies. The decision seems like a major setback for AAPL, which counts on revenue from its App Store to fuel its profits. The stock fell more than 3% on Friday, its worst performance in months, and now trades nearly $10 below the all-time highs it posted recently.

AAPL shares had been on a roll over the summer along with the other mega-caps, helping send the SPX to a series of record highs. Friday was just one day, not a trend, but it’s important to keep an eye on the performance of these behemoths to get a picture of where the SPX might go.

Even as AAPL shares slid, shares of Match Group (MTCH), Spotify (SPOT), and Zynga (ZNGA) all rose Friday, perhaps getting some traction from a ruling that may allow them to keep more of the money they make instead of paying so much to AAPL when customers come across their products on an iPhone. It’s a good lesson for investors that often when one company gets battered by a news event, other companies can benefit. You just have to know the landscape going in.

GOOGL also got clipped Friday by the news, maybe due to worries that the decision has implications for its online store.

There’s more AAPL news potentially on the way tomorrow when the company is scheduled to host an event where media reports say it could introduce its iPhone 13 and Apple Watch 7. The iPhone 12 launch last year was considered by many analysts to be a big success, but the mid-October launch event wasn’t a hit on Wall Street, at least not right away.

Shares of AAPL actually fell sharply immediately after the event on Oct. 13, and didn’t recover to their pre-event level for about a month. It wasn’t until late November that AAPL shares began a major rally, perhaps in part because by then it was becoming clear that the product was a hit. That might be lesson number two for today: Not to let a product launch announcement and all the hype around it get you too excited about a stock. It’s like President Reagan once told Soviet leader Gorbachev: “Trust but verify.”

There’s more than just AAPL this week. Tomorrow’s August Consumer Price Index (CPI) could be right up there with AAPL as far as headline-drawing power. Last week’s August Producer Price Index (PPI) came in slightly above Wall Street’s consensus expectations, but the core PPI that strips out food and energy was in line with analysts’ estimates. On a year-over-year basis, however, PPI growth hit a record high. That wasn’t necessarily what bullish investors wanted to hear, and might have added to the selling pressure Friday.

For CPI, the consensus estimate—according to Briefing.com—is for 0.4% headline monthly growth, according to research firm Briefing.com, and core growth of 0.3%. That would be down from 0.5% headline growth last time out, but equal to the 0.3% core growth seen in July. Anything much above the estimates would likely get a fish-eye from Wall Street and raise concerns about the Fed potentially having to get more hawkish (see more below).

Retail sales coming up this Thursday and the University of Michigan initial September sentiment report Friday are also probably worth watching, and we’ll discuss them more as the week advances.

Washington Worries: Beltway drama is just one of many things looming over the market as the week starts. There’s debate on Capitol Hill about extending the U.S. debt ceiling, something Treasury Secretary Janet Yellen warned about last week. It’s getting down to decision time soon on the infrastructure bill. And we’re starting to hear the first chattering among politicians about whether Fed Chairman Jerome Powell should be nominated for a second term. Powell’s term doesn’t end until early next year, but the decision might be a lot closer than that.

Back in 2017, President Trump nominated Powell to replace Yellen as Fed chair in early November, so a decision by President Biden on Powell may be only a matter of weeks if he keeps the same timeline. If it starts looking like Biden is thinking of following the progressive wing of his party and naming someone different, you can’t count out chances of some rockiness in the markets, which could be reflected in more volatility both in stocks and bond yields. Not necessarily because Wall Street is in love with Powell, but simply because any change at the top might mean a change in Fed policy down the road. Whether or not you like Powell as chairman, the market is used to him now that he’s been there so long. When Trump replaced Yellen four years ago, the economy wasn’t nearly as bumpy, either. A transition now might have a bigger impact with the Fed so embedded in its Covid stimulus program.

Tapering Hype Gets Mixed Market Reception: Could the bond market finally be starting to believe all the hype about a potential Fed tapering getting underway soon? The answer is a firm “maybe,” judging from Friday’s action after the European Central Bank (ECB) said it would slow its stimulus and The Wall Street Journal reported the Fed is considering a taper starting in November. Following this news, the 10-year Treasury yield popped a couple of basis points to 1.35%, but remains below technical resistance at 1.38% and well below the highs from nearly six months ago of around 1.75%. The PPI reading might have been a factor supporting the 10-year yield.

Arguably, the stock market has been more of a barometer of the Fed’s possible taper, considering how soft it was most of last week. Some of that could reflect fears of tighter money ahead. One interesting thing, however, was seeing homebuilder stocks like Toll Brothers (TOL) and DR Horton (DHI) outpace the SPX on Friday despite rising yields. Assuming the Fed does taper, it’s possible that could mean the central bank trimming its purchases of mortgage-backed securities, a program that’s helped keep mortgage rates near record lows for a year now. Shares of both DHI and TOL were even in the green for a bit on Friday before getting caught up in the general market weakness, but neither has exactly hit the cover off the ball since earlier this year. That could suggest investors in housing stocks were a bit ahead of bond investors in anticipating Fed policy.

Oracle Earnings Ahead: The earnings calendar looks like the Sahara Desert this week, but Oracle (ORCL) is expected to report this afternoon after the close. The interesting thing about ORCL is that it’s a really established company with a huge presence around the world that can often give a great indication of not just what’s going on in the U.S., but worldwide, especially in the cloud arena. Their earnings calls can sometimes be particularly good opportunities to get a sense of the business climate, especially this time as the Delta variant hit so many countries.