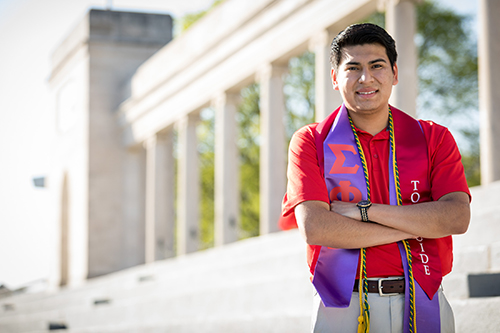 Anthony U. Itzol, a senior from Bowling Green who studies International Business, learned early on that making personal connections is vital in the business world.

During his senior year of high school and while attending his younger sister’s school music performance, Itzol found himself in a conversation with his dad’s boss about college and career plans.

When his dad’s boss asked what was next after high school, Itzol started naming off large universities in the southern region of the U.S.- schools he was thinking about attending. When asked why he wanted to move so far away and go to a big school, Itzol explained that he was thinking about studying marine biology, something he had an interest in from the time he was young. He said his dad’s boss pressed a little more by asking him what his plans were for after college.

“He had me stumped. I was thinking about how I don’t want to be the guy that dresses up like a shark at Sea World for the rest of my life,” Itzol said. “I am quite family-oriented because of my culture. I felt like WKU was the best option financially, and I knew that if I ever needed family support, they were literally down the street. I knew that there wasn’t a demand here and no way to easily study the ocean in Bowling Green or anywhere in Kentucky for that matter. He asked me what my backup plan was, and I told him that my backup plan was business because I know Spanish and English. During our conversation, he really encouraged me in that direction.”

Itzol said his dad’s boss went on to tell him that if he worked hard in college, he could have him selling Coca-Cola products after graduation. Itzol did not forget that promise, and neither did his dad’s boss.

“Four years later, I can say that my dad’s boss kept his promise. I am going to be working full-time at Clark Beverage Group, Inc. after graduation,” Itzol said. “That conversation was one of the big reasons I chose to study international business.”

While at WKU, Itzol said his academic programs taught him the importance of networking, gaining valuable real-world experiences, having a business strategy, and the basics of running a business.

Just as the pandemic hit last spring, Itzol learned about an internship opportunity at Clark Beverage Group, Inc., a distributor for Coca-Cola products, through Gordon Ford College of Business Internship Coordinator Monica Duvall. Itzol called up his connection, his dad’s boss, who was unaware of the internship opportunity but encouraged him to apply.

“Throughout my program, I’ve learned a lot of different business models, how to run a business, gain competitive advantage, pivot on strategies when needed, and how to differentiate myself. Growing up, I learned that I can differentiate myself through a different language. Something Clark Beverage Group appreciated was that I could open up a new market for them through being bilingual. Hispanic grocery stores are now selling Coke products from them because I could go to them and say – ‘Hey, instead of going to Walmart and buying these in bulk, you can buy them from us. We can give you more product at a better price,’” Itzol said.

“My program at WKU taught me about being strategic in everything. I’m getting a certificate in Applied Data Analytics. In my internship, I analyze the sales of vending machines. Being able to run different graphs and charts in the classroom is great, but applying it to the real-world, seeing those numbers and how they compare year by year, and being able to figure out that this flavor doesn’t work in this location because there is no correlation of people liking it, that is the real-world experience I received through my internship.”

Itzol also credits his campus involvement for providing him leadership opportunities and the space to learn valuable time management and communication skills. In addition to his internship, he is involved in his fraternity, Sigma Phi Epsilon. He also works as a Topper Orientation Program Guide for the Office of Admissions and he volunteers as a Gordon Ford College of Business Ambassador.

In the fall of 2019, Alpha Omicon Pi sponsored Itzol as a Coming Home King candidate. He enjoyed a week-long schedule of events, including a service outing at a local elementary school and a special banquet that brought his family to campus.

“I’ve learned valuable skills through my involvement in Greek life. With my fraternity, I started as Brotherhood Chair, I moved on to be Sorority Relations Chair, and I worked my way up one year to be a Homecoming Chair. After that, I became Vice President of Programming which allowed me to oversee all the social and philanthropic events within the chapter,” Itzol said. “Campus involvement taught me time management skills. For example, it taught me not to spread myself too thin and that it’s OK to say ‘no’ to certain things.”

Itzol graduates next week with a Bachelor of Science in International Business with a concentration in Global Entrepreneurship and a certificate in Applied Data Analytics. He will begin his career at Clark Beverage Group, Inc. as an analyst and on-premise sales representative with digital marketing responsibilities. He plans to begin pursuing his Master’s in Business Administration within the next year. Looking to the future, he hopes to work his way up through Clark Beverage Group, Inc. and eventually become a vice president for Coca-Cola North America in Atlanta.

For more information about earning a degree in International Business, visit: https://www.wku.edu/management/bachelor-of-science-in-international-business.php

#WKUGrad series:  As part of our #WKUGrad series, articles on graduating students are shared in the weeks leading up to Commencement. See all of their stories at https://www.wku.edu/news/articles/index.php?view=default&categoryid=799&multinewsid=187